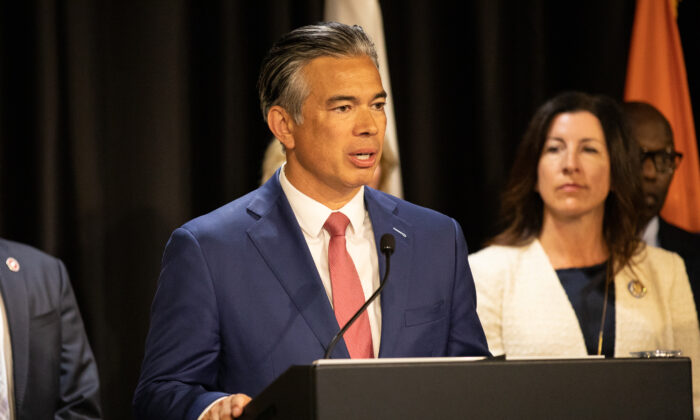 The move by Attorney General Rob Bonta was confirmed in a letter (pdf) sent to the sheriff’s department Sept. 20.

The investigation was launched after a Metro whistleblower alleged that Kuehl contributed to awarding lucrative contracts to Peace Over Violence, a nonprofit organization run by her close friend Patricia Giggans. The series of no-bid contracts worth more than $800,000 was for the nonprofit to operate a sex-harassment hotline for Metro riders and employees between 2014 and 2020.

Last week, sheriff’s investigators searched Kuehl’s home and office, along with offices at Metro, the Metro Office of Inspector General, and Giggans’s home and office. After the Sept. 14 raid, Kuehl said a county attorney had contacted her the night before and told her about the search.

Although the search warrant noted that Sheriff Alex Villanueva recused himself from any involvement in the investigation to avoid any appearance of conflict, he sent a letter later that day to the Attorney General’s Office asking it to look into whether county Inspector General Max Huntsman and the county counsel’s office had violated the law by notifying Kuehl of the search ahead of time.

“The illegal acts committed by Mr. Huntsman and county counsel have potentially compromised the integrity of this criminal investigation including, but not limited to, the concealment or destruction of evidence,” the sheriff wrote.

In the Sept. 20 letter responding to that request, Bonta wrote that his office would look into those allegations, but he said since that matter is directly tied to the underlying corruption probe into Kuehl, Metro, Giggans, and Giggans’s nonprofit, he would take that over as well.

“Given that Sheriff Villanueva has recused himself from the underlying investigation of Peace Over Violence and Patricia Giggans, and by seeking our assistance he recognizes that he should be recused from any related matters, I believe that the handling of all these matters by [Department of Justice] will be in the public interest,” Bonta wrote. “Therefore, we will assume all responsibility for the underlying investigation of Peace Over Violence, Patricia Giggans, et al.”

Kuehl has strongly denied the allegation, saying she had no involvement in the contracts and did not vote on them as a member of the Metro Board of Directors.

Jennifer Loew, the whistleblower and a former Metro employee, has also alleged that former Metro CEO Phillip Washington ignored alleged billing improprieties involving the nonprofit because he wanted to remain in “good graces” with Kuehl.

Kuehl has blasted the probe as a retaliatory action by Villaneuva, who has repeatedly clashed with the Board of Supervisors over budget and policy issues and has rebuffed subpoenas to appear before the county’s Civilian Oversight Commission, of which Giggans is a member. The commission is in the midst of a series of hearings investigating the activities of alleged deputy gangs within the department.

Villanueva defended the probe, saying it originated with a legitimate allegation of criminal activity.

Ryan declined to reverse the warrants or order the return of seized equipment, but he ordered the sheriff’s department to refrain from copying any information on any of the seized computers, and disclose if any such copies have already been made.

Attorneys for the Metro’s Office of Inspector General and Kuehl challenged the legality of the warrants. Metro attorneys argued that a separate judge had previously determined that a special master should be appointed to review materials seized from the transit agency in any investigation.

Ryan scheduled another hearing for Sept. 22, asking a series of questions—including why the sheriff ignored the previous ruling and went to a different judge to get the search warrants signed after the initial judge reviewing the matter called for a special master in the case.