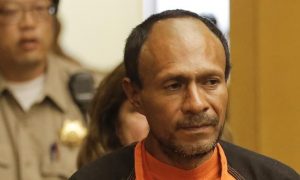 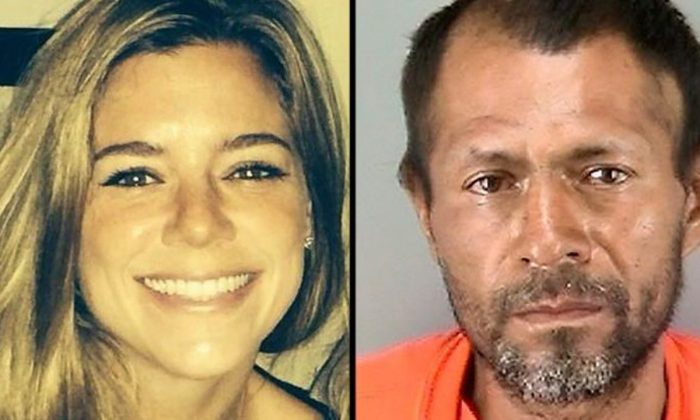 SAN FRANCISCO—A California state appeals court on Friday, Aug. 30, threw out the sole conviction against an illegal immigrant who fatally shot a young woman on the San Francisco waterfront in 2015 in a case that sparked a national immigration debate.

Jose Inez Garcia-Zarate was acquitted of murder in the killing of Kate Steinle, who was walking on a pier with her father when she was struck by a bullet in the back in July 2015. The appeals court overturned a single conviction on a charge of being a felon in possession of a gun.

The case against Garcia-Zarate, who was in the country illegally and had been deported five times, was a regular talking point in Donald Trump’s 2016 presidential stump speeches.

The 1st District Court of Appeal overturned the gun conviction because the judge failed to give the jury the option of acquitting Garcia-Zarate on the theory he only possessed the weapon for a moment.

The ruling means prosecutors have the choice of retrying him in San Francisco Superior Court on the single count, but it may have little real impact because Garcia-Zarate remains in custody facing related federal charges.

Garcia-Zarate said he unwittingly picked up the gun wrapped in a T-shirt, and it fired accidentally. The bullet ricocheted off a concrete walkway and struck Steinle, who was with her father and a family friend.

The weapon used in the shooting belonged to a U.S. Bureau of Land Management ranger who reported it stolen from his car parked in San Francisco.

Defense lawyers argued on appeal that because Garcia-Zarate held the gun for such a short moment, he couldn’t be convicted of illegal gun possession.

Prosecutors argued that the jury instruction lapse was harmless because Garcia-Zarate admitted firing the gun and experts said he couldn’t do so without pulling the trigger.

The court disagreed, saying the jury’s verdict showed they rejected the prosecution theory that the shooting was intentional or even negligent and they had asked the judge to define possession and whether there was a time requirement for possession.

“These questions go to the heart of the momentary possession defense,” Justice Sandra Margulies wrote in the 3-0 decision. “The fact the jury asked whether there was a time requirement for possession suggests jurors were wrestling with how long defendant had the gun.”

Public defender Matt Gonzalez, who argued the case before the jury, said the improper instruction meant that Garcia-Zarate did not get a fair trial.

“This really wasn’t a close call. We were entitled to the instruction, and we should’ve had it. We thought that Mr. Garcia-Zarate would have been acquitted had the jury been instructed this way, so this is very gratifying for us,” he said. “He picked up an object not knowing what it was, it fired, and he threw it to the ground when it did fire.”

Garcia-Zarate, who was facing deportation proceedings at the time of his arrest in the killing, had been released by county jail officials three months before the tragic event.

Immigration and Customs Enforcement officials had requested that the Sheriff’s Department inform them of his release date and hold him until they could pick him up. But San Francisco’s sanctuary city policy barred local law enforcement officials from cooperating with most federal immigration investigations.

Trump referred to the shooting on the campaign trail as he railed on sanctuary cities and argued for tougher immigration policies.

After the acquittal in 2017, Trump called the verdict in “disgraceful” in a Tweet, and former U.S. Attorney General Jeff Sessions blamed the sanctuary city policy for Steinle’s death.

A disgraceful verdict in the Kate Steinle case! No wonder the people of our Country are so angry with Illegal Immigration.

Garcia-Zarate was sentenced to three years in prison on the gun charge, but he ended up serving no additional time because of time he spent behind bars awaiting trial.

He was taken into custody, however, on federal charges, where he awaits trial Jan. 13 for gun possession.

“That kind of error causes reversals all the time. Then the prosecution has the prerogative of going again,” Serra said. “It’s going to be a big potential decision on what they’re going to do.”

Gonzalez said in a typical case it would not be likely for prosecutors to retry a defendant on a charge for which he cannot serve any more jail time, but “given the political nature of the case, it’s anybody’s guess as to what they will do.”

The San Francisco district attorney’s office was weighing its options, spokesman Alex Bastian said. The state attorney general’s office, which argued the case on appeal, also said on Aug. 30 it was reviewing the case.