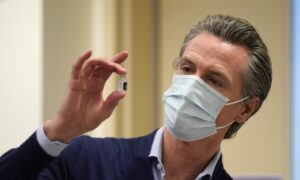 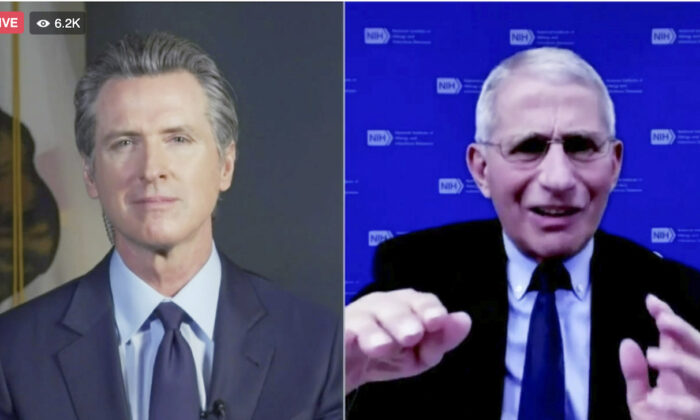 California Gov. Gavin Newsom (L) and Dr. Anthony Fauci (R) during a conversation on Dec. 30, 2020. (Office of the Governor via AP)
Southern California

Gov. Gavin Newsom announced on Wednesday the first known case of the new and potentially more contagious variant of the CCP virus in California.

The infection was found in Southern California, Newsom said during an online conversation with Dr. Anthony Fauci, head of the National Institute of Allergy and Infectious Diseases.

“I don’t think Californians should think that this is odd. It’s to be expected,” Fauci said of the new case in the state, adding that more cases of the variant are likely to surface in the country.

The announcement came about 24 hours after the first reported U.S. case in Colorado. The variant, B.1.1.7, is the same as the one discovered in the United Kingdom. Scientists believe the variant is more contagious than others previously identified but is no more severe in the symptoms it causes. They also believe that the vaccines now being distributed will be effective against it.

The first B.1.1.7 case in Colorado was identified on Wednesday involving a Colorado National Guardsman who hadn’t been traveling but was sent to help at a nursing home struggling with an outbreak. The patient, who is in his 20s, is recovering in isolation at a hotel in Elbert County, a mostly rural expanse on the edge of the Denver metropolitan area, officials said Dec. 29.

Health officials said that a second Guard member may have also been infected with the new variant of the CCP (Chinese Communist Party) virus, which causes the disease COVID-19.

State epidemiologist Dr. Rachel Herlihy said that the two Guard members were among six dispatched on Dec. 23 to the Good Samaritan Society nursing home in the small town of Simla, in a rural area about 90 miles outside Denver.

Nasal swab samples taken from the two as part of the Guard’s routine coronavirus testing were sent to the state laboratory, which began looking for the variant after its spread was announced in Britain earlier this month, Herlihy said.

The nursing home said it is working closely with the state and is also looking forward to beginning vaccinations next week.

Colorado public health officials are carrying out contact tracing to determine the spread of the new variant. The state’s chief medical officer, Dr. Eric France, said that researchers estimate the B.1.1.7 variant is 50-70 percent more contagious.

“Instead of only making two or three other people sick, you might actually spread it to four or five people,” France said, reported AP. “That means we’ll have more cases in our communities. Those number of cases will rise quickly and, of course, with more cases come more hospitalizations.”

Several states, including California, Massachusetts, and Delaware, are now analyzing suspicious virus samples for the variant, said Dr. Greg Armstrong, who directs genetic sequencing at the Centers for Disease Control and Prevention. He said the CDC is working with a national lab that gets samples from around the country to broaden that search, with results expected within days.

Britain is seeing infections rise and hospitalizations headed to its highest levels on record. The new B.1.1.7 variant has also been found in several European countries, as well as in Canada, Australia, India, South Korea, and Japan, and more.

London and southeast England were placed under strict lockdown measures this month because of the variant. Dozens of countries have banned flights from Britain.

It is not unexpected for viruses to mutate but the fear is that, at some point, the mutations will become significant enough to resist the vaccines.