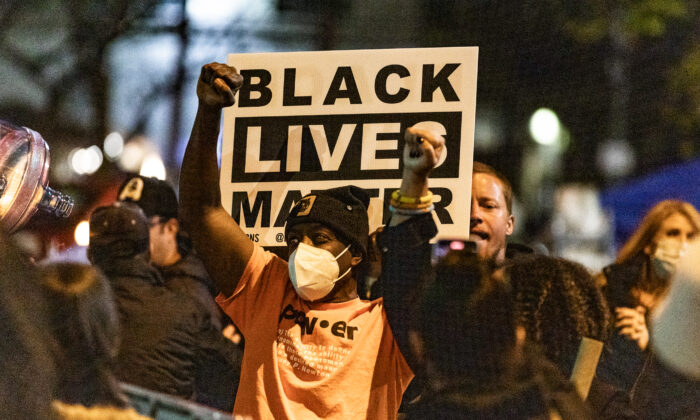 The Black Lives Matter (BLM) organization and its leaders have come under fire from the California Department of Justice for failing to disclose detailed financial reports on up to $60 million in donations.

Bonta’s letter warns BLM that it was “delinquent with The Registry of Charitable Trusts for failing to submit required annual report(s)” for the 2020 tax year.

“An organization that is delinquent, suspended or revoked is not in good standing and is prohibited from engaging in conduct for which registration is required, including soliciting or disbursing charitable funds,” the letter states.

BLM has 60 days to provide the delinquent reports to the California Department of Justice, according to the letter.

Bonta’s office did not respond to requests for comment on Feb. 2.

The letter was issued during Black Lives Matter at School Week, Jan. 31 to Feb. 4.

The Washington Examiner reported that BLM “wasn’t even registered with the Internal Revenue Service as a charity” for the first six years of its existence.

“But after George Floyd’s murder in May of 2020, tens of millions of dollars were given to this organization from major corporations and celebrities. And now, no one even knows where all that money has gone. Even worse, there doesn’t appear to be anyone in charge of the organization who can provide that information,” the Examiner reported.

BLM was founded in 2013 when George Zimmerman was acquitted for the killing of Trayvon Martin, when Patrisse Khan-Cullors created the hashtag #BlackLivesMatter. She co-founded the group with Alicia Garza and Opal Tometi.

After the controversial death of George Floyd in 2020, BLM was flooded with contributions to its cause.

“BLM channeled donations through Thousand Currents and the Tides Foundation until the IRS approved its application for nonprofit status in December 2020. Around that time, Thousand Currents transferred $66.5 million to BLM—a transaction personally signed off on by BLM co-founder Patrisse Cullors,” according to the Examiner.

BLM also moved millions of dollars to a charity in Canada run by Cullors’s wife, Janaya Khan, “to purchase a mansion that used to be the headquarters of the Communist Party of Canada,” according to public records reviewed by the New York Post.

The Post reported: “M4BJ, a Toronto-based non-profit set up by Janaya Khan and other Canadian activists, snagged the 10,000 square foot historic property for the equivalent of $6.3 million in cash in July 2021,” according to Toronto property records viewed by the newspaper.

Cullors admitted a few years ago in a widely publicized video that she and her fellow activists are “trained Marxists.”

This week, the BLM School Week of Action—promoted by the California Teachers Association (CTA) and the National Education Association (NEA) teachers’ unions—is calling for the “disruption of Western nuclear family dynamics.”

A starter kit on the Black Lives Matter at School website lists the organization’s demands that schools fund “counselors not cops,” and that black history and ethnic studies be taught in the classroom. The curriculum also advocates for “black villages” and “globalism.”

“Black Villages is the disruption of Western nuclear family dynamics and a return to the ‘collective village’ that takes care of each other,” the starter kit documents state. “Globalism is our ability to see how we are impacted or privileged within the Black global family that exists across the world in different regions.”

The organization released its first impact report (pdf) in February, 2021.

The report claims BLM collected more than $90 million in 2020, spent $8.4 million on operating expenses, and disbursed $21.7 million to its local chapters and affiliated organizations. However, the report lacked specific details about how the funds were spent.

Cullors resigned from BLM three months after the report was released.