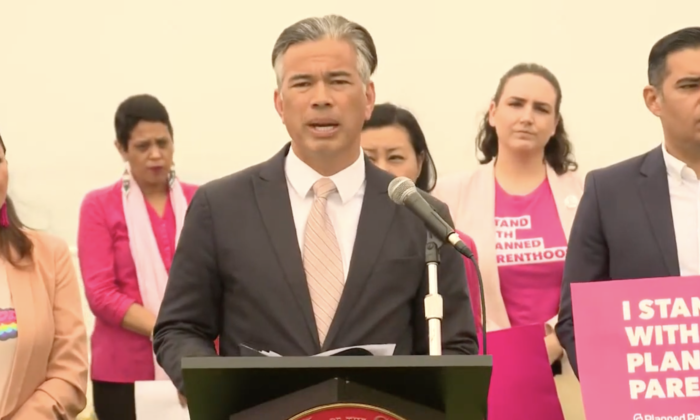 LONG BEACH, Calif.—The California Attorney General Rob Bonta joined local officials from Long Beach, Calif., to support the current abortion policy established by Roe v. Wade—the 1973 decision that overrode the states and legalized abortion throughout the country—following the leak of a draft opinion by the U.S. Supreme Court majority that signaled a potential overturn of the landmark precedent.

At a press conference on May 6, Bonta expressed his support for the federalized abortion policy and said the reversal of the Roe v. Wade decision would set the country back for 50 years.

“Hell no to going backward. Hell no to reversing 50 years of settled law. Hell no to stripping women of their right to reproductive freedom,” Bonta said.

Sen. Lena Gonzalez (D-Long Beach), host of the event and a longtime advocate for abortion in California, urged community members to voice their support for legal abortion nationwide and said she expects the state of California to become a sanctuary state for pregnant women seeking an abortion.

“[D]enying access to abortion care means denying reproductive freedom and does not align with our nation’s values,” Gonzalez said in a May 3 statement.

Gonzalez’s Senate Bill 245—The Abortion Accessibility Act—aims to expand access to abortion services by eliminating out-of-pocket costs such as copayment or deductible and was signed into law by Gov. Gavin Newsom in March.

Robert Garcia, the mayor of Long Beach, said access to abortion services is “critical,” and the city has been collaborating with other nonprofit organizations to promote such access.

“We stand with anyone seeking an abortion,” Garcia said. “And we won’t stop this fight until we win.”

The organizations present at the conference in support of the federal legalization of abortion included the California Latinas for Reproductive Justice, Women of Long Beach, Black Woman for Wellness, League of Women Voters, LGBTQ Center of Long Beach, and Planned Parenthood.