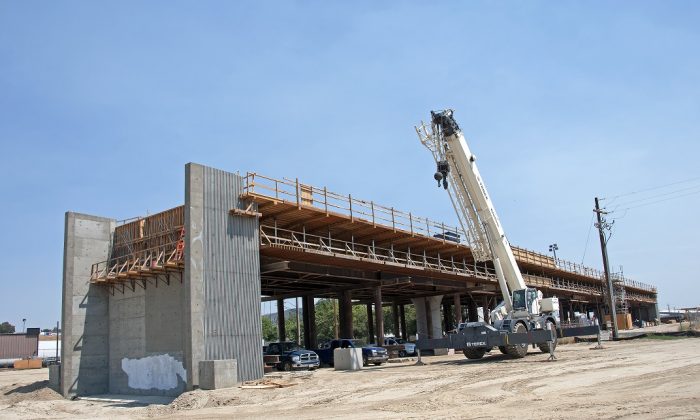 An activist in California is calling on Gov. Gavin Newsom to stop the state’s high-speed rail project in response to President Donald Trump’s call for the return of the federal government’s investment.

“It is the time for Governor Newsom and the Democrats to do the right thing, to defund, and to cancel this project immediately,” said Konstantinos Roditis, the vice chairman of Reform California, a 527 political action committee dedicated to holding state and local governments accountable.

Roditis was a Republican candidate for state controller in the 2018 midterm election. During his campaign, he promised to end the high-speed rail project the first day after swearing into office.

He didn’t win the election, and joined Reform California to continue his effort to end government waste.

“This odd project has been sold to the California builders with certain conditions. None of these conditions have been met, and can’t be met,” Roditis told The Epoch Times in a phone interview.

The project originally planned to connect San Francisco and Los Angeles, at a travel time of 2 hours and 40 minutes. However, because of speed restrictions, certain design requirements, and cost concerns, a subsequent report had an estimate of 3.5 to 4 hours of total travel time.

“Basically, you can literally go to the airport, go through security, jump on a plane in San Francisco, get off the plane [in Los Angeles], go through security again, jump on another plane and come back. You would probably do a whole round trip with pretty much the same time as it would take for the high-speed rail to go one way,” Roditis said.

Proposition 1A authorized the state to allocate $9.95 billion to build the high-speed system, but required federal matching funds. With total estimated costs of $40 billion in 2008, the remaining balance, in addition to state and federal funding, was expected to be raised from private investments.

After Proposition 1A was approved, the state High-Speed Rail Authority issued a new cost estimate, with revised total costs between $98.5 billion and $118 billion.

The project has received no private investments.

Newsom, in his State of the State speech on Feb. 12, called the project too expensive, slow, and opaque. Newsom’s statement was made based on a recent official estimate of a total of $77 billion. Newsom said he would reduce the scope of the project to focus on finishing the 171 miles of the project through California’s central valley from Merced to Bakersfield.

One week after Newsom’s speech, the U.S. Department of Transportation (DOT) canceled a $929 million grant to the project, and began “actively exploring every legal option” for the return of $2.5 billion it has already allocated to the project.

Newsom, who has criticized DOT’s decision as serving Trump’s political purpose, shows no intention of stopping the ongoing project.

“Gavin Newsom basically said: I would rather spend up to $100 billion tax dollars than giving $2.5 billion back to the federal government. I’d rather sink more money into it because I hate Donald Trump that much,” Roditis said. “That is unbelievable and immoral.”

Roditis said the DOT has the authority to request the return of its previous investment if California can’t fulfill what it promised to accomplish on the project. He pointed out that according to DOT’s standards, the project is no longer considered high-speed.

In some of the regions with dense populations, such as San Francisco and Los Angeles, the project needs to share track with the Southern Pacific Railroad system. In order to do so, the “high-speed” train can only travel as fast as the regular train line.

Roditis believes that the project still continues because of the contractors and labor unions that will directly benefit from the project.

“If not, I am dedicated to putting a ballot item in 2020, to defund and repeal the high-speed rail once and for all,” Roditis said.