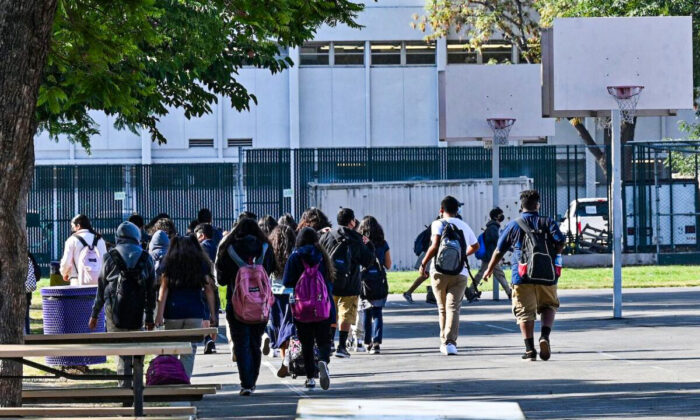 Students walk to their classrooms at a public middle school in Los Angeles, California, on Sept. 10, 2021. (Robyn Beck/AFP via Getty Images)
Viewpoints

California: A Transgender Mecca for Minors

The NHS announcement was long overdue.

In truth, Tavistock is an “absolutely broken institution,” and GIDS appears to have done far more harm than good. As The Daily Mail’s Sue Reid recently noted, the decision to close GIDS is “a vital and long overdue step in righting the wrongs of what could perhaps be the biggest medical scandal this century—the routine use of puberty-blocking drugs on children.” Not just a few children either. Thousands of children.

The Brits, so often lauded for their level-headedness, have finally seen sense. Can the same be said for their allies in the United States?

Four states—Alabama, Arizona, Arkansas, and Texas—recently enacted laws restricting youth access to “gender-affirming care,” including the use of puberty blockers. These powerful drugs suppress puberty in children by halting the production of sex hormones such as estrogen and testosterone. Of all the puberty blockers available, Lupron is one of the more popular.

As Stat’s Christina Jewett previously noted, those who use Lupron are at risk of significant mood swings and headaches. Users have “also described conditions that usually affect people much later in life,” such as osteopenia, a loss of bone mineral density that weakens bones, as well as osteoporosis. One user who spoke with Jewett required a hip replacement. Another user now suffers from a degenerative disc disease.

According to Dr. Michael K. Laidlaw, a board-certified physician based in California, it’s best to view Lupron as a key that brings messages to the pituitary gland, a pea-sized endocrine gland that releases important hormones. When the effects of Lupron hit, the pituitary immediately reacts by reducing the number of locks available.

“These locks correspond to cellular receptors, and their numbers are drastically reduced by the administration of Lupron,” notes Laidlaw, a specialist in the study of gland and hormone disorders.

“Blocking the action of the pituitary gland and drastically lowering sex hormones in this way effectively ‘freezes’ pubertal development.”

Moreover, the blocking plays a direct role in the creation of the disease state known as hypogonadotropic hypogonadism, a condition in which the male testes or the female ovaries essentially stop producing sex hormones. Those suffering from hypogonadism require lifelong treatment.

Finally, he cautioned, the vast majority of youngsters on puberty blockers never reverse course. Instead, they “move on to cross-sex hormones and then to sterilizing genital surgeries.” In short, it’s best to view puberty blockers, which increase the chances of liver damage and rapid weight gain, as a gateway drug of sorts. It starts with the suppression of hormones, but where does it end?

To answer this question, look to California.

“You could travel the world, but nothing comes close to the golden coast,” pop singer Katy Perry once sang. Indeed. Nothing comes close to California, a place where shoplifting appears to be a state-endorsed pastime. Besides being a safe haven for both petty and violent criminals, California is fast becoming the go-to state for gender-affirming care.

According to California Family Council (CFC), the bill seeks to empower the state’s courts to take “temporary emergency jurisdiction” over children if they come in search of “trans-drugs, surgery, or mental health care.” As Johnston noted, if the legislation gets the green light, adults would be permitted to bring children and adolescents “to California for experimental and damaging transgender medical interventions, without the knowledge or consent of their parents.”

The idea of such a proposal will shock many readers, I’m sure. In reality, though, it really shouldn’t. After all, this is California we are talking about, a state that offers transgender services to children as young as 3 years old. Yes, 3. The University of California–San Francisco Children’s Hospital now offers puberty blockers and sex hormones to toddlers.

There’s a very clear reason why Finland recently banned the use of puberty blockers. The Swedish government also has moved to prevent children and teens under the age of 18 from accessing these dangerous drugs. As authors at Remix wrote in December 2021, children who were administered hormone blockers at Karolinska University Hospital in Stockholm “sustained severe, life-long injuries,” despite doctors knowing that children were at risk of “catastrophic injuries as a result of the administration of hormone blockers.”

Let this be a lesson. The bill being proposed in California poses a direct threat to the country’s children.