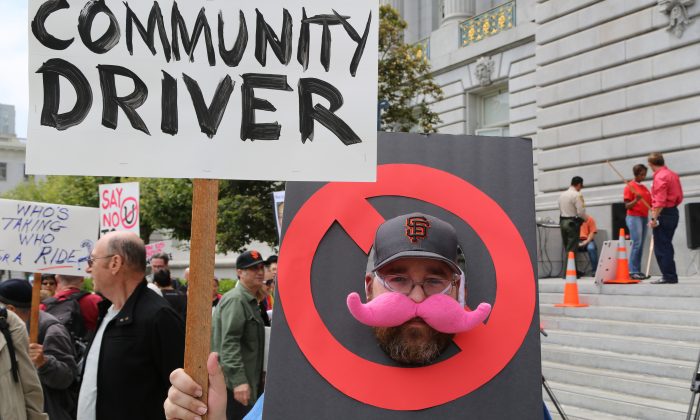 The proposal came as cab drivers staged a noisy protest and blocked traffic outside City Hall and the state Public Utilities Commission office nearby.

The rules, which could become final as early as Sept. 5, would define online-based ride-share services like Lyft, Uber, and Sidecar as “transportation network companies.” That would put them under a different category than that which has long governed taxicabs and limousine services.

Transportation network companies would have to meet certain requirements before they can seek a permit to operate. Those requirements include having their drivers undergo driver training and criminal background checks, the proposal said.

The companies would also have to carry a minimum $1 million per-incident insurance policy for vehicles and drivers, which is more stringent than the rule that requires that limousines that carry seven or fewer passengers carry $750,000 in coverage. They would also have to implement a zero-tolerance policy on drugs and alcohol.

For the PUC, this is a turnaround. Last year the commission issued a cease and desist notice and cited ride-share services for operating illegally.

Ride-share services say business has been soaring, particularly during a transit strike in the Bay Area that displaced hundreds of thousands of commuters in early July.

Lyft wrote in a blog post that the CPUC has “set a new standard for safety in transportation while supporting innovation that makes cities safer, more affordable and better connected.”

Lyft, whose cars sport a pink mustache, maintains that they already go beyond most of the safety standards, including drivers being screened for convictions of reckless driving, sexual assault, and other violent crimes.

Sidecar and Lyft were launched in 2012 in the Bay Area. Sidecar has established operations in eight major cities in the United States. Lyft is now based in Los Angeles as well as San Francisco.

Both Sidecar and Lyft offer a smartphone app that matches people in their own cars to people nearby for shared rides.

The companies have faced calls for bans, however, because they compete with taxis. Some of the services get around safety regulations and government fees by working under a donation-based system.

Robert Cason has been driving taxis for 32 years. For Cason, who attended the City Hall protest Tuesday, safety is the No. 1 concern, he says. While he and his fellow drivers need to be vetted by the FBI, this does not apply to ride-share drivers.

“Let’s all play by the same rules,” Cason said.

Another concern for cab advocates is insurance coverage in case of injury of drivers, passengers, or pedestrians from a ride-share vehicle.

Lyft and Sidecar maintain that they have already established an up-to-$1 million insurance policy with CPUC in the event that the driver’s insurance does not cover an incident.

Christopher Dolan, from the Dolan Law Firm, believes that neither insurance—the driver’s nor the ride-share company’s—will pay in case of an incident, but that the city will pick up the bill and drivers might face legal consequences.

In Sidecar’s Terms of Services it states, “Sidecar does not warrant, endorse, guarantee, or assume responsibility … for any property damage, including to your vehicle, personal injury, up to and including death, that occurs as a result of the ride or your use of the service.”

“The drivers are duped,” Dolan said. “You got these young people out there who think they are involved in a social experiment. They are teetering on the brink of disaster,” he said.