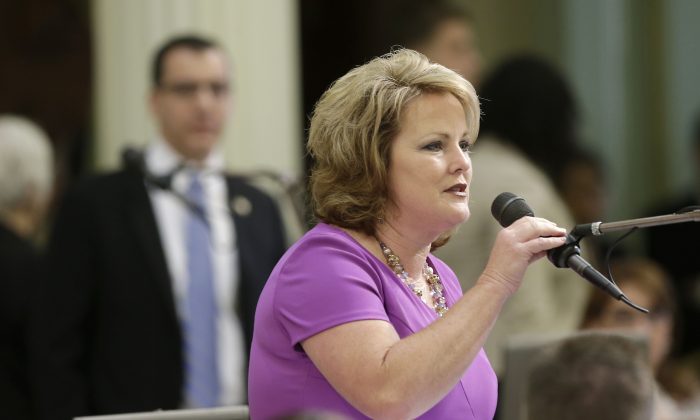 Assemblywoman Shannon Grove (R-Bakersfield) urges lawmakers to reject measure, carried by Assemblyman Bob Blumenfield, D-Woodland Hills (L), chair of the Assembly budget committee, to undo changes in a budget bill that could restrict access to public records held by local governments, at the Capitol in Sacramento, Calif., June 20, 2013. By a 52-25 vote, the Assembly approved the measure SB71, that withdraws the language giving local governments the option to comply with the California Public Records Act. (AP Photo/Rich Pedroncelli)
Politics

SACRAMENTO, Calif—Seeking to quell a media outcry over access to public records, the governor’s administration on Thursday said it agrees with a fix-it bill moving through the Legislature that restores a mandate for local governments to comply with document requests.

The governor’s spokesman, Evan Westrup, told The Associated Press that the governor’s office supports the new approach taken by the Democratic leaders in the Assembly and Senate.

The leaders have pledged to undo language that threatened the public’s access to government documents. The language is contained in a budget bill the Legislature approved last week and sent to the governor.

Earlier Thursday, the Assembly passed legislation that restores the local government mandate for complying with the state Public Records Act, and the Senate leader then said his house will take up the bill soon.

“We support the legislative leaders’ approach, which will eliminate uncertainty about local compliance with the law and, on a permanent basis, ensure that local government pays for what has long been its explicit responsibility,” Westrup said.

Senate President Pro Tem Darrell Steinberg and Assembly Speaker John Perez said a longer-term fix would be in the form of a constitutional amendment that ensures public access to documents while requiring that local governments pay for complying with the law.

Media outlets throughout California had objected over part of the bill passed last week, known as AB76. It relieved the state of its responsibility for reimbursing the costs incurred by local governments and other agencies, such as water and school districts, when they receive records requests from the media or the public.

In doing so, the Legislature made complying with the records act optional, rather than required, and encouraged the local bodies to follow “best practices” in releasing information.

Numerous editorials lambasted the action and urged Brown to veto the bill.

In a joint statement Thursday, Steinberg and Perez said both legislative chambers see the need for a short-term fix to ensure public records remain accessible.

“As the Senate advances its proposed constitutional amendment, the Assembly will work with them throughout its process to give voters the chance to make clear that good government shouldn’t come with an extra price tag,” the leaders said.

A proposed constitutional amendment passed by the Legislature this year would most likely go on the statewide ballot in 2014.

The legislation passed Thursday in the Assembly, known as SB71, includes all the budget-related items in the original bill but withdraws the language giving local governments the option to comply with records requests. It also deletes a section related to ethics mandates and compensation for local officials.

It passed the Assembly on a 52-25 vote and will be sent to the Senate.

Republicans opposed the bill because of the other items it contains but said they would have supported a single-issue bill preserving the public records requirement. They criticized Democrats for making last-minute changes to bills, particularly budget measures, and then bringing to them to a swift vote on the Assembly floor.

“We all talk about transparency and sunshine, but when you guys have the opportunity, you cram stuff into these budget bills and then you put them on the floor and there’s language in there that no one has had the opportunity to review or read,” said Assemblywoman Shannon Grove, R-Bakersfield.

Brown proposed the original Public Records Act change as a way to save the state money. The nonpartisan Legislative Analyst’s Office estimates that it costs the state tens of millions of dollars a year to reimburse local governments and agencies for complying with document requests.