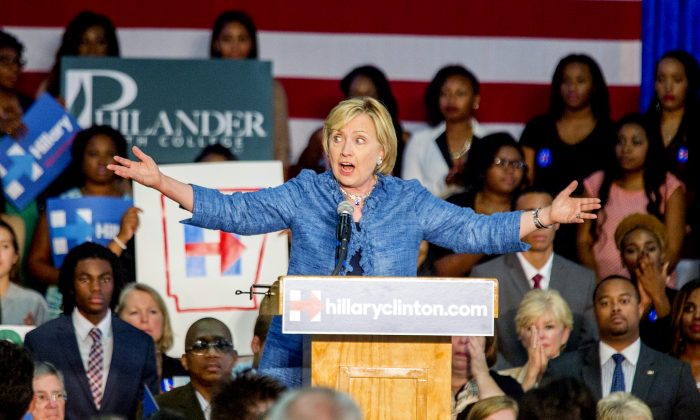 The woman who would become a 2016 presidential candidate met or spoke by phone with nearly 100 corporate executives, Clinton charity donors and political supporters during her four years at the State Department between 2009 and 2013, records show. Many of those meetings and calls, formally scheduled by her aides, involved heads of companies and organizations that were pursuing business or private interests with the Obama administration at the time, including with the State Department while Clinton was in charge.

In addition, at least 60 of those who met with Clinton have donated or pledged program commitments to the Bill, Hillary and Chelsea Clinton Foundation. A dozen have been among Hillary Clinton’s most reliable political fundraisers, bundling more than $100,000 in donations during her failed 2008 presidential campaign or providing larger amounts to Clinton-allied super political action committees this time. And at least six entities represented in the meetings paid former President Bill Clinton lucrative fees for speeches.

The AP found no evidence of legal or ethical conflicts in Clinton’s meetings, in its examination of 1,294 pages from the calendars. Her sit-downs with business leaders were not unique among recent secretaries of state, who sometimes called on corporate executives to aid in international affairs, according to archived documents.

But the difference with Clinton’s meetings was that she was a 2008 presidential contender who was widely expected to try again in 2016. Her availability to luminaries from politics, business and charity shows the extent to which her office became a sounding board for their interests. And her ties with so many familiar faces from those intersecting worlds were complicated by their lucrative financial largess and political support over the years — even during her State Department tenure — for her campaigns and her husband’s, and for her family’s foundation.

In its response to detailed questions from the AP, the Clinton campaign did not address the issue of the candidate’s frequent meetings with corporate and political supporters during her State Department tenure. Instead, campaign spokesman Nick Merrill said “Secretary Clinton turned over all of her work emails, 55,000 pages of them, and asked that they be released to the public. Some of that will include her schedules. We look forward to the rest of her emails being released so people can have a greater window into her work at the department.”

The State Department turned the Clinton calendars over to the AP earlier this month, documents the AP sought for two years under the Freedom of Information Act. The department censored many meeting entries for privacy reasons or to protect internal deliberations, making it impossible to discern all the identities of those who met Clinton. A State Department spokesman declined to comment on the agency’s redactions of the calendars or the arrangements for Secretary of State John Kerry’s daily schedules.

The AP has also sought detailed planning schedules that aides sent Clinton before each day’s events, but the State Department has declined to search through the files of some of Clinton’s close aides at the time. The State Department’s release of Clinton emails has so far turned up at least 155 planning schedules, called “minischedules,” but they account for only a tiny percentage of Clinton’s four-year stint — 7 percent of the 1,159 days covered by those email releases.

Merrill said Clinton was not sent the planning “minischedules” every day or when she traveled, “which would account for why you see some on some days and not on others.”

The AP also found at least a dozen differences between Clinton’s planners and calendars involving visits by donors and longtime loyalists. In one example, a June 2010 Clinton planning schedule that the State Department released uncensored shows a 3 p.m. meeting between Clinton and her longtime private lawyer, David Kendall. But Clinton’s formal calendar lists the 20-minute session only as “private meeting — secretary’s office,” omitting Kendall’s name.

The Clinton campaign could not explain those discrepancies but said the candidate had made a good faith effort to be transparent by giving her work-related emails to the State Department for public release.

The calendars offer hour-by-hour depictions of Clinton’s hectic diplomatic schedule in Washington and her foreign tours crammed with meetings with dignitaries. Even so, she found time to meet CEOs, loyalists and donors.

“It shows Hillary Clinton marrying her political interests with the business and policy interests of powerful people,” said Lawrence Jacobs, director of the Center for the Study of Politics and Governance at the University of Minnesota. “These are the people you cultivate to lay the groundwork for running for president.”

Clinton favored a select group of visitors — at least two dozen — for repeated meetings. Abraham, the billionaire behind SlimFast diet products and chairman of the S. Daniel Abraham Center for Middle East Peace, met with Clinton at least three times and was slated to meet her three other times, according to her calendars and schedules. Clinton’s calendars showed they met at her office in May 2009 and October 2010. Clinton also spoke at an Abraham Center event in April 2010.

Abraham has given $5 million to $10 million to the Clinton Foundation and donated $1.2 million in 2012 to Priorities USA Action, a super PAC supporting Clinton in 2016. Abraham told the AP that he assumed that he and Clinton discussed Mideast policy during their contacts.

Teachers’ union chief Weingarten met Clinton three times, in 2009, 2010 and 2012. Emails released by the State Department show that Weingarten’s policy aide, Tina Flournoy, messaged Clinton at her private account in mid-September 2009 saying that “Randi and would like to visit you re: child labor issues — if that’s possible, whom should I contact to schedule?”

Clinton responded: “I would love to see you and Randi. I’m copying Lona (Clinton’s scheduling aide) to see how soon we can schedule. Hope you’re well.”

Less than three weeks later, Weingarten and Flournoy — now chief of staff to Bill Clinton — met Hillary Clinton for a half hour, according to the calendars. That year, the union spent nearly $1 million lobbying the government on issues that included child labor in Uzbekistan. The union also spent at least $1 million in both 2010 and 2012, the other years Weingarten met with Clinton.

“We discussed a range of issues with Secretary Clinton — including the growing refugee crisis, expanding access to education globally and curbing child labor practices,” said Kate Childs Graham, speaking for the union.

Weingarten’s union endorsed Clinton’s 2016 presidential bid in July, and Weingarten is on the board of Priorities USA Action. The union has also given $1 million to $5 million to the Clinton Foundation and committed, along with two banking partners, to launch a $100 million loan fund to expand classrooms for young children under the auspices of the charity’s Clinton Global Initiative.

PepsiCo CEO Nooyi also had at least three scheduled contacts with Clinton. In February 2010, Nooyi and GE’s Immelt met Clinton as part of the State Department’s efforts to secure corporate money for an American pavilion in China’s Shanghai Expo in May of that year. PepsiCo spent $6.8 million in 2010 on government lobbying. Nooyi talked twice with Clinton by phone in 2012, a year when PepsiCo spent $3.3 million on lobbying Congress and federal agencies, including State Department officials, on issues such as trade pacts and Russia legislation.

Nooyi is not a prominent Clinton political supporter, but PepsiCo has been active with the Clinton Foundation. PepsiCo’s foundation pledged in 2008 to provide $7.6 million in grants to two water firms as a commitment to the Clinton Global Initiative. The Clinton charity also listed a PepsiCo Foundation donation of more than $100,000 in 2014, the same year the soda company’s foundation announced a partnership under the charity to spur economic and social development in emerging nations.

A top executive with PepsiCo’s main rival, Coca-Cola, which donated $5 million to $10 million to the Clinton Foundation, also discussed the Shanghai event with Clinton in a 2009 conference call along with executives from Pepsi and several other firms. PepsiCo spokesman Jon Banner declined to discuss conversations or meetings it said its senior leaders may have had.

A dozen other executives and political supporters met or were in phone contact with Clinton at least twice during her State Department tenure — among them Immelt, Saban, Soros and Clinton intimate and now-Virginia Gov. Terry McAuliffe, according to the calendars.

Another was Alfonso Fanjul, one of four brothers who run a Florida-based sugar and real estate conglomerate and are politically active in the state’s Cuban-American community.

Fanjul, whose family subsidiaries include Domino Sugar and Florida Crystals, was a Florida co-chairman for Bill Clinton’s first presidential campaign in 1992, supported Hillary Clinton’s 2008 run and has donated between $100,000 and $250,000 to the Clinton Foundation. Florida Crystals spent $1 million lobbying the Obama administration in 2011 and nearly that amount in 2009, 2010 and 2012 on issues related to sugar and its use as a biofuel.

Fanjul met Hillary Clinton for a half hour in October 2009. Gaston Cantens, a spokesman for the firm, said Fanjul sought the 2009 meeting because he was having “customs issues coming in and out of the country and wanted help.” Cantens said Fanjul’s entry and exit problems eased.

Clinton met Fanjul again at a 10-minute “pull-aside” during a Brookings Institution luncheon in June 2012. The event honored Saban and his wife, Cheryl, who both bundled donations to Hillary Clinton’s 2008 campaign and whose family foundation has donated between $5 million and $10 million to the Clinton Foundation.

The calendar doesn’t say what they discussed, but the event came two months after Fanjul returned from a trip to Cuba with a Brookings delegation. Fanjul, a Brookings trustee who had been a longtime foe of U.S. trade with Cuba, has publicly reversed course on the issue and is now open to investments there.