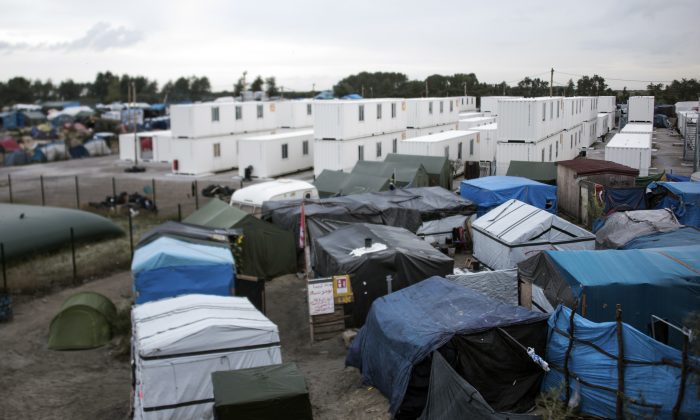 Calais Migrant Camp to Be Razed by Year-End: Hollande

French President Francois Hollande said Monday the sprawling “Jungle” migrant camp in Calais would be dismantled by the end of this year under a plan to spread asylum seekers around the country.

“I have come to Calais to confirm the decision that I took with the government… to dismantle (the camp) definitively, entirely and rapidly, that means by the end of the year,” Hollande said on his first visit to Calais as president.

French President Vows to Shut Down Calais Camp This Year

Hollande called on British authorities to help in assisting the migrants, most of whom are desperate to reach Britain.

“I am determined to see the British authorities play their part in the humanitarian effort that France is undertaking” in Calais, Hollande said, flanked by security forces.

Between 7,000 and 10,000 migrants are currently living in the “Jungle”, the launchpad for their attempts to stow away on lorries heading across the Channel to England.

Hollande met police, local politicians, NGOs and business leaders in the northern port city but was not expected to visit the camp itself.

The Socialist president has been under pressure from right-wing rivals to close down the “Jungle”.

A flurry of preparations in Calais suggest the operation to raze the collection of makeshift shelters may begin shortly.

The government has said the migrants, who are mostly from Sudan and Afghanistan, will be moved to 164 reception centres around the country “before winter”.

Hollande said Britain’s vote to exit the European Union did not diminish its responsibility for the migrants camped across the Channel.

“Just because the United Kingdom has taken a sovereign decision, it does not mean it is freed from its obligations towards France,” he said.

Hollande said the vote also had no effect on the bilateral Le Touquet agreement which effectively means that the British border extends to Calais’s ferry ports, where British immigration officials check passports and inspect vehicles.

Hollande’s visit comes just days after his conservative predecessor Nicolas Sarkozy — who is hoping to return as president in next year’s election — visited Calais to promote his tough line on migration.

Migration has been a low-key issue of Hollande’s four-year presidency.

But he has been forced to take a stronger stance on the issue, under pressure from Sarkozy and far-right leader Marine Le Pen.

Both Sarkozy and Le Pen have made immigration and national identity key themes in early campaigning for next year’s election, which has echoes of the US race for the White House.

On a visit to one of the new reception centres in the central city of Tours at the weekend Hollande said France would not be a “country of camps.”

Calais has become a symbol of Europe’s failure to resolve the migration crisis that continues to divide the continent, after people fleeing war and misery across the Mediterranean began pouring into Europe in unprecedented numbers.

Plans to relocate the Calais migrants have sparked controversy and protests, with residents in some parts of the country vehemently opposed to taking them in.

Several hundred people demonstrated at the weekend in Versailles, west of Paris, against plans to move a group of migrants there.

The “Jungle” camp has also become a sore point in relations between France and Britain.

Last week, building work began on a British-funded wall to clamp down on repeated attempts by migrants to stow away on trucks heading for Britain.

Rights groups have criticised the hardship and dangers facing the migrants living in the camp, particularly the hundreds of unaccompanied minors.

A 14-year-old Afghan boy was killed by a car earlier this month as he tried to climb aboard a truck.

Around half of the unaccompanied minors in Calais are estimated to have family across the Channel.

But the process of trying to reunite them with their relatives has been dogged by delays.