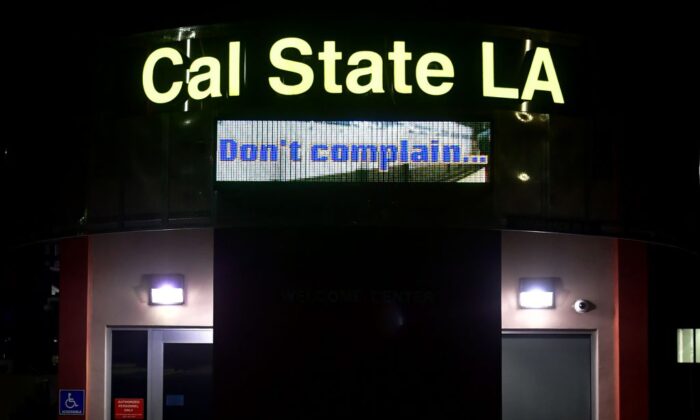 The California State University–Los Angeles campus is pictured during a measles quarantine that was issued for staff and students in Los Angeles, Calif., on April 25, 2019. (Frederic J. Brown/AFP via Getty Images)
Southern California

LOS ANGELES—California State University–Los Angeles President William A. Covino announced Aug. 18 that he will retire at the end of this academic year.

Covino has served as president since 2013 and worked for more than 40 years in higher education. In a statement, Covino said he was honored to have held the role.

“To offer students a transformative education, one that forever changes their lives, the lives of their families, and their communities, is a high aspiration,” Covino said. “At Cal State LA, we hit the mark day after day, year after year.”

Covino’s retirement will be effective at the end of June 2023, and the university will begin a nationwide search for his successor.

During his tenure, Cal State LA climbed more than 70 spots in the west region in U.S. News and World Report rankings, according to the university. It also ranked as the top school in the nation for upward mobility in 2017, according to an Equality of Opportunity Project research study.

“The university has made remarkable progress by more than doubling the four-year graduation rate for first-year students. Students coming from community colleges are achieving similar success, with their graduation rates reaching all-time highs, as well,” she said.

Covino, the seventh president in the school’s history, previously served as provost and vice president for Academic Affairs at Fresno State and provost at Stanislaus State.

“Over the course of more than 40 years in higher education, Bill Covino has transformed the lives of countless students at San Diego State, Stanislaus State, Fresno State, and Cal State LA, and I thank him for his many years of distinguished and dedicated service to the CSU,” Koester said.