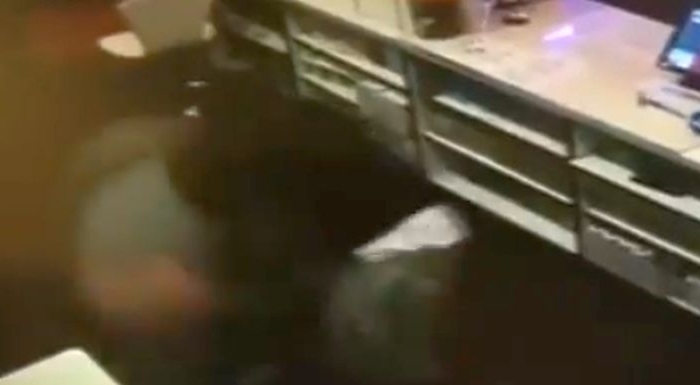 During an attempted robbery at Bambu Desserts and Drinks in Houston, the cafe’s owner was able to take away the gun belonging to the suspect before firing several shots at him.

Video footage of the incident shows the robbery suspect hitting the owner at around 11 a.m. on Thursday. After a commotion, the owner then wrestles the firearm away and fires about six shots.

The robber had demanded that the owner open up the safe before hitting the owner.

The attempted thief then escaped as shots were fired.

The owner, who wasn’t identified, told News Fix that he was fighting for his life.

“I thought I was going to die. He told me he was gonna shoot me,” the owner said. “The gun could’ve went off, and it would have shot into my stomach. And that’s a .357, so I would have been dead.”

Two people were waiting outside the cafe in a getaway car, employees said, as reported by the Daily Mail.

No injuries were reported. A window was shattered in the incident, ABC13 reported.

The three suspects, including the man who attempted to rob the cafe, were arrested a short time later. Their names and the charges were not released to media.

“The guy’s an idiot,” the owner of the cafe said of the suspect.

“He even told the cop … when the cop grabbed the gun from the counter and he brought it into the car, he said the suspect said: ‘Can I have my gun back?’”

Store Owner Wrestles Gun Away From Robber, Fires – HOUSTON, TX — A store owner was engaged in the fight of his life when his cafe was attacked by a group of three thugs. Two of the thugs waited in the getaway car while one came in the store, armed, an… https://t.co/izp0pT1d0I