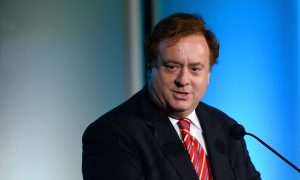 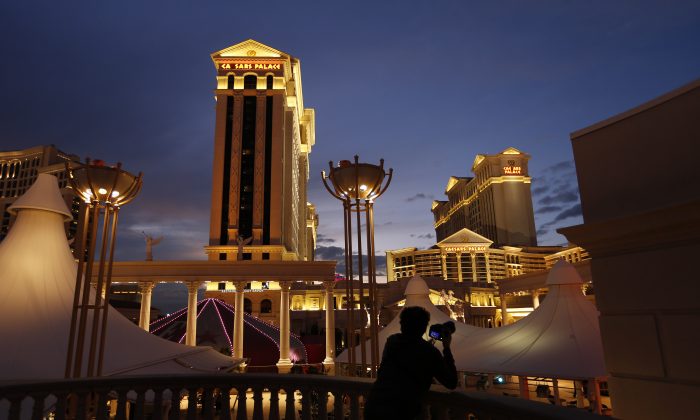 A man takes pictures of Caesars Palace hotel and casino, in Las Vegas, on Jan. 12, 2015. A cash-strapped division of casino giant Caesars Entertainment Corp. said early Thursday Jan. 15, 2015 that it filed for bankruptcy protection in Chicago, hoping the court agrees to its plan to get out from under $18.4 billion of debt. (AP Photo/John Locher)
Business

LAS VEGAS—A cash-strapped division of casino giant Caesars Entertainment Corp. filed for bankruptcy protection Thursday in Chicago, hoping the court agrees to its plan to get out from under $18.4 billion in debt.

The division, Caesars Entertainment Operating Co., owns and operates most of Caesars’ 50 properties worldwide. Caesars CEO Gary Loveman said in a statement that its casino-hotels would remain open and continue to host meetings and events, assuring customers that their loyalty points would still accrue and the company’s lineup of onstage entertainers would perform according to their schedules.

“I am very confident in the future prospects of our enterprise, which will combine an improved capital structure with a network of profitable properties,” Loveman said in the statement.

More than 30,000 people are employed at the debt-laden division’s 38 casino-hotels, including Bally’s and Caesars in Atlantic City and the iconic Caesars Palace on the Las Vegas Strip.

In a video message posted online, Loveman said employees would continue to receive pay and benefits as usual.

The filing from Caesars Entertainment Operating Co. in a Chicago bankruptcy court came as no surprise.

The company has been weighed down by sizable debt ever since Apollo Global Management LLC, TPG Capital LP and other investors bought the casino giant in January 2008 for $30.7 billion, using $6.1 billion of their own cash and paying the rest with $24.7 billion in debt.

Caesars has been negotiating with creditors and lenders for months on a reorganization plan that would turn the division into a real estate investment trust — one to own properties and the other to lease properties — promising creditors cash or new debt.

Not everyone is on board, though, including three junior creditor hedge funds owed $41 million that contend the plan isn’t fair. In a bid to get more favorable terms, they filed a petition Monday in Delaware’s federal court to force the division into involuntary bankruptcy.

The judge in Delaware sided with the creditors, issuing a stay to stop the company’s Chicago filing while allowing it to make initial requests to keep its operations going.

Those requests were approved by a Chicago judge, some on an interim basis.

Caesars Entertainment Operating Co.’s own filing Thursday could set off a “sideshow” of jurisdictional wrangling to decide where the case would be heard, Delaware or Illinois, said University of Michigan law professor John Pottow.

Caesars’ lawyers have noted the division doesn’t own or manage any casino-hotels in Delaware.

Cathy Reece, director of law firm Fennemore Craig’s bankruptcy practice, pointed out that Enron filed for bankruptcy in New York, rather than in its home state of Texas, and the court agreed. It’s up to the company as long as it can prove a connection to the area, she said.

Several casino-hotels owned and managed by Caesars Entertainment Operating Co. are in the Midwest including two in Illinois, Harrah’s Joliet and Harrah’s Metropolis, and the Horseshoe Hammond casino in Indiana near Chicago, the company explained in a filing with the judge in Delaware.