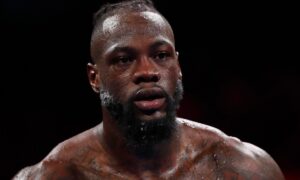 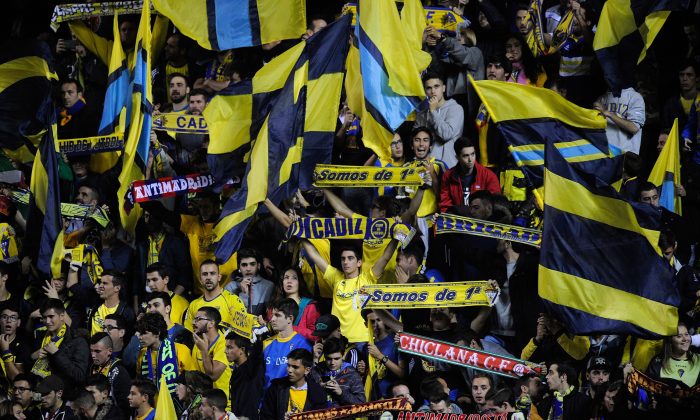 Cádiz fans cheer on their team before the start of the Copa del Rey Round of 32 first leg match against Real Madrid at the Estadio Ramón de Carranza on Dec. 2, 2015 in Cádiz, Spain. (Denis Doyle/Getty Images)
International

Cádiz CF: Pride of the Peninsula

CADIZ, Spain—The slight, yellow-draped figure of No. 27 stands stoic near the edge of the 18-yard box.

Around him, 13,278 yellow- and blue-clad fans rise as one in collective anticipation. On this sun-drenched pitch in Andalusia, Spain, No. 27—a player by the name of Ortuño—can send his football club into an unlikely promotion playoff with a goal.

The stadium falls into a hush. The initial cacophony of whistling, gesturing, and frantic puffing of cigarettes, which followed the penalty decision have been replaced with nervous energy.

Ortuño jogs up and promptly skies his effort some 20 feet over the crossbar, eliciting sighs of shock and disbelief from the home crowd.

Mere seconds after the setback, however, the fans are unanimously chanting and clapping in support of their unlucky striker.

In this barren corner of the southern province of Andalusia, there are few constants: a dry, desolate heat, a turbulent economy, and Cádiz Club de Fútbol.

We have the best support in the division, bar none.
— Cádiz midfielder Akeretxe

Resilient against the blazing sun and through a series of historic disappointments, the club and its fans are one of the steadiest institutions in this oft-forgotten corner of Spain. And now, they’re within a few results of a return to their country’s top division for the first time since 2006.

As the tifo unfurled by supporters states boldly: “Eso Nunca Va A Parar.” (This Will Never Stop.)

Similar to the shores of the peninsula it calls home, Cádiz C.F. has experienced sunny highs and battering lows.

From historic pinnacles like an eight-year stay in the Spain’s top flight and the mercurial exploits of Magico Gonzalez in the 1980s, to the dreary lows of a club-worst, 13th-place finish in the third-tier in 2012–13, the “Yellow Submarine” have been a mainstay in the region.

At times, the club’s image and following have outstripped its on-field performance—a testament to its fan base, one as passionate as you’ll find in any European second division.

In football, each season brings a plethora of changes: new players, managers, and narratives. And Cádiz C.F. has been no different. Throughout the complex weave of relegations, promotions, hirings and firings, its supporters have remained steadfast.

“Cádiz C.F. is a main theme in this city, and for people from here this club is everything,” says supporter Julio Iglesias an hour prior to kickoff. “This club is a part of our collective identity.”

For Iglesias, a schoolteacher in neighboring Puerto Real, the club is a special place.

“We’ve brought our students to today’s match to show them the Cadista way,” explains the physical education teacher. “They already have all the official jerseys and merchandise. It’s incredible how far-reaching this club is in our region.”

The diversity of Cádiz’s fan base is remarkable: a sweeping glance of the stands shows babies in Cádiz-themed onesies, old men lighting cigarettes with Cádiz-stamped lighters, and large families sporting the club’s colors.

“I’ve been a [season-ticket holder] for many years,” reflects Iglesias. “I was here through the dry years and now here we are, supporting them at a time when they can really step up.”

The regulars which fill the steep stands at the Estadio Ramón de Carranza have been through hell and back. Through the disappointment of an ugly single-year (2005–06) stint in La Liga, to the ignominy of away days against the B-teams of clubs it used to face regularly, Cádiz has without fail been one of the best-supported teams in Spain.

Famously good-natured, the club’s “aficion” (fan base) is renowned for both unflinching support of its own players and its recognition of the quality of visiting teams, which in turn appreciate the Estadio Ramón de Carranza’s unique atmosphere.

“They’ve got a good side and have turned this ground into a fortress,” said Gerard. “We experienced it firsthand. It’s a special atmosphere.”

On this May 7 afternoon, Cádiz somewhat labor to a 0–0 draw against Gerard and relegation-fodder Gimnastic, but it doesn’t matter.

Alvaro Cervera’s Cádiz side, which finished a mere fourth place in last year’s third tier, are now all but guaranteed a spot in June’s promotion playoffs. The mood around the ground and city is festive.

The “submarine” could be within a few results of a return to La Liga after an 11-year absence.

“Our support is magnificent, the best I’ve known in football,” enthuses Cervera, who turned out for first-division clubs Valencia and Mallorca as a player and has criss-crossed the country as a manager. “Winning or losing, they are here at the stadium supporting us. They make what we do fun, they’re a massive part of this club.”

Cádiz midfielder Akeretxe, a 23-year-old on loan from Bilbao, believes the “Cadistas” enjoy a special bond with their supporters.

“We have the best support in the division, bar none,” says the diminutive midfielder. “They’ve been through a lot, but are still always behind us in our worst moments, they maintain our spirit.”

Spirit is at the heart of Cádiz C.F.

As the sun sets on the Estadio Ramón de Carranza, and the hosts press but fail to find a late winner against Gimnastic, a sense of ritual hangs in the air.

Old men rise creakily from their seats, gesturing in wild unison for a yellow card against the visitors. Small children belt out the club’s chants, while pregnant women clap out its flamenco-style rhythm. Smoke hangs in the air.

Perhaps, with a little luck and a dash of quality on the pitch, this club and its supporters will return to where they belong: The promised land of the Primera Division.

“It would be a dream,” says Iglesias softly, surveying the pitch from the stadium’s west stand. “To play in the top flight, and have players like Leo Messi and Cristiano Ronaldo on our pitch would be an honor—not just for our club, but for our city.”

Carlos Verde is a journalist based in Ottawa, Canada with a background in sports, communications, and media. His work has appeared on FIFA.com, Last Word on Sports, and Women’s Soccer Zone.