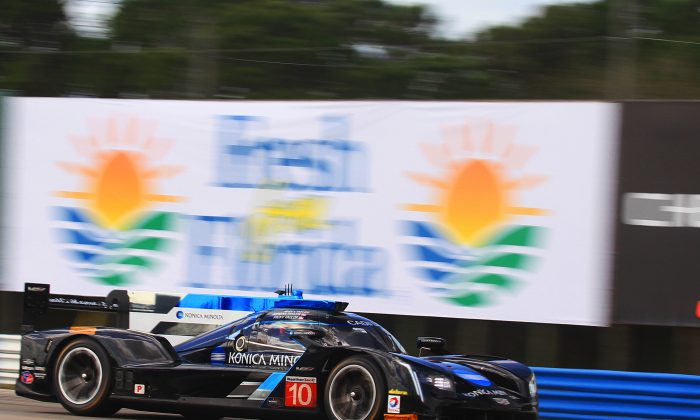 SEBRING, Fla.—The 2017 IMSA Sebring Winter Test is over. For two days three dozen of the world’s fastest sports cars bounced and blasted around Sebring Raceway’s 3.74 miles of cracked concrete runways and asphalt patches, laying down lap times which the IMSA management will use determine Balance of Performance for the rest of the season (hopefully.)

Thirty-four cars were entered for the two-day, four-session event, Thursday and Friday, Feb. 23–24. Except for a bit of dampness in session one, conditions were perfect: warm, mostly sunny, and most important, stable, so that teams could adjust their cars to seek performance instead of trying to adjust to changing track conditions.

The results are in. Now it is time for IMSA management to pore over the data and determine the final performance adjustments to make for the field of the WeatherTech Sportscar Championship for its next big event, The Mobil 1 Sebring Twelve Hours on March 18.

A tricky task it will be.

In the premier prototype class, the teams which have dominated the series for the past three years continued to dominate.

Whelen Engineering and Mustang Sampling, the two teams split off from the old Action Express Racing operation, which have won the series title three years’ running, along with Rolex 24 winners Konica-Minolta/Wayne Taylor Racing, had the three fastest entries. Whelen and Mustang were quickest in the two Thursday sessions; Konica/WTR topped both sessions on Friday. The competition was never better than three-quarters of a second off the pace, and twice that far back during most sessions.

Does this mean the Cadillac DP1 V.Rs which these three teams field are simply better cars? More developed, better tested, more refined? These three teams have no shortages in the budget department—plenty of cash to fund track tests and simulations.

Or is it that the Cadillacs have been badly balanced by the series?

IMSA makes minute adjustments to the weight, fuel fill flow, engine performance, and aerodynamics of each car, in attempt to create a level playing field for the broad diversity of chassis and engines teams bring to the fray. Fans love the variety, but to make it work the series needs to make sure that all the cars are competitive. And that is an Herculean task.

Does the Cadillac’s 6.2-liter V8 have an advantage in low-end torque, which allows it to exit corners better, thus explaining the better lap times? Does it have more top-end horsepower or an aerodynamic edge, which would account for it having the highest top speed among all the cars entered?

Or is it that the engineers at these three teams have done more testing, have a better understanding of how to adapt the tires to the chassis? The top speed advantage at Sebring was slight—two mph covered the top eight entrants—but a second’s difference in lap times …. it isn’t like the competition are slouches.

It’s a tough balance. IMSA doesn’t want to favor a particular car but it also wants to let the best prepared team reap the rewards—it isn’t racing if teams are penalized for being fastest.

IMSA management collects reams of data electronically from each car in real time. While an outside observer can only analyze lap times, sector times, and top speeds, IMSA knows everything each engine and chassis is doing at every point around the track.

If IMSA officials have a tough task ahead to balance the prototypes, in GT Le Mans, the job seems to be done already.

Five makes contest GT Le Mans: Corvette, Ferrari, Ford, Porsche, and BMW, and three of the five took a turn at the top of the timesheets.

The #66 Ford GT was the only car to top two sessions. Each of the Corvettes led a session,a nd the #25 BMW was quickest Thursday morning. The #67 Ford GT was second quickest twice.

Ferrari managed third twice. of course, Ferrari is statistically hindered, with Risi Competizione being a one-cat team facing a trio of tandems. Still, Risi managed to be third quickest in two sessions.

Porsche GT Team only brought one car, the #912, but managed second best in two sessions.

As is usual for the class, times were tight, with the top 21 quickest laps of all cars and drivers being within half a second of each other.

Jan Magnussen in the #3 Corvette won fast lap of the event honors with a time of 1:58.525 at 113.5 mph. Dirk Werner in the #912 Porsche was six-thousandths of a second off, with the same average speed. Ryan Briscoe set the quickest lap for a Ford, a tenth of a second and a tenth of a mile per hour behind Magnussen.

In short, GTLM will once again offer a field of nearly perfectly matched vehicles; driver skill, team coordination, tactics, and luck will decide the race, as it should.

GT Daytona doesn’t seem to get much respect among fans, but it is hard to figure why not. This class repeatedly offers up competition on par with GTLM (long the gold standard for good racing) and also offers more variety in chassis and motors.

Porsche, Ferrari, Acura, Audi, Lexus, Lamborghini, BMW, Mercedes …. yes, this is a Pro/Am class, with widely varying driver talent, but every team has the same mix, so driver talent becomes another tactical tool. There are several highly successful series around the world based wholly on these cars—yet in IMSA, with its wealth of excellent racing, GTD is almost an also-ran.

The top of the GTD timesheet was a mix of stalwarts and newcomers. Core Autosports, new to the class but well familiar with Porsches—the team also runs Porsche’s North America’s GTLM team—set best time of the event, 2:02.476 at 109.9 mph. Another veteran team new to the series, the Montaplast-by-Land Audi, was less than two tenths back, ahead of the Stevenson Racing Audi, less than three-tenths behind the leader.

Another pair of Porsches, veterans Park Place and Rolex-24 winners Alegra, rounded out the top five overall. Alex Job racing managed to take third fastest in the second session, and the Dream Racing Lamborghini was third quickest in the final session.

Other than the success of Dream Racing, not much surprising about all that.

The Lamborghinis of Dream Racing and GRT-Grasser, as well as the brand new 3GT Lexus, showed unexpected strength. The Lamborghini Huracan, ridiculously fast when it was first introduce a year ago, have never quite fulfilled its promise; perhaps teams are finally figuring out how to make it run with the regularly fast cars.

The Lexus, with only one race to its name, was within seven-tenths of the #54 Core’s best lap of the event. This could be a car to watch; after a disappointing debut at Daytona, the 3GT crew seems to have gotten a handle on the chassis.

That’s right … IMSA WeatherTech is running four classes this season. Prototype Challenge is easily forgettable—undersubscribed, and pretty much unnoticed except when an amateur driver loses it in traffic and brings out the caution flags … The class will disappear in 2018. For the meantime, most fans are happy if the PC cars stay out of the way.

Now that PC cars have traction control, they seem to cause a lot fewer incidents. Who knows how this class might have fared if it had had driver assists all along?

Only two PC Orecas showed up for the test, the #8 Starworks car and the #26 Bar1 entry. The Starworks car was consistently faster—but it will face serious competition from the Rolex-winning #38 Performance Tech Oreca at the Twelve Hours.

Well, it is a safe bet that one of the Cadillacs will win overall. Expect a finish like the Rolex—whichever of the three have not been sidelined by mechanical issues (and one can be sure the electrical systems have been thoroughly gone over) will be in a wheel-to-wheel battle for the win after twelve hours.

Even if the cars get hit with a slight Balance of Performance adjustment, the cars and teams are so strong, it is impossible not to think they will be the favorites.

There ought to be a separate class for the non-Cadillac DPis and P2s—and likely Patron-ESM would have the edge there, just due to experience. ESM’s crew and drivers have more time in top-tier prototypes at Sebring than any of their competitors, and are the defending champions. If the #2 car is still on track in the last two hours, look for another bravura performance by Pipo Derani—but based on the Rolex and Sebring testing, the new Nissan DPi isn’t quite in the same league as the Cadillacs.

IMSA management applied changes with a light tough before the Rolex—minor adjustments which didn’t suddenly catapult one car up the timesheets, which is as it should be. it remains to be seen whether IMSA thinks the other DPi and P2 chassis are good but not being used optimally, or if it decides to give them a little help.

Much as it would be refreshing to see a different team atop the podium, one has to hope that IMSA will again be gentle with its adjustment. Performance is close enough through the Prototype ranks that even if the Cadillacs always come out on top, it doesn’t seem that the other chassis a necessarily disadvantaged. Finding that extra tenth is what racing is all about.

GTLM and GTD likely won’t change much. There is enough data on these cars that neither teams not eh series need to make any radical adjustments, just a little fine-tuning here and there. Both classes promise excellent battles throughout the Twelve Hours.

The 65th Mobil 1 Twelve Hours of Sebring Fueled By Fresh From Florida—surely IMSA could have imagined and even longer title?—will take the green flag at 10:40 a.m. on Saturday, March 18, 2017. The race weekend also features the Continental Tire Sportscar Challenge Sebring 120, plus Mazda Prototype Lites, and Porsche GT3 Cup.

Tickets can be bought by phone at (800) 626-RACE or online via the Sebring Raceway website.