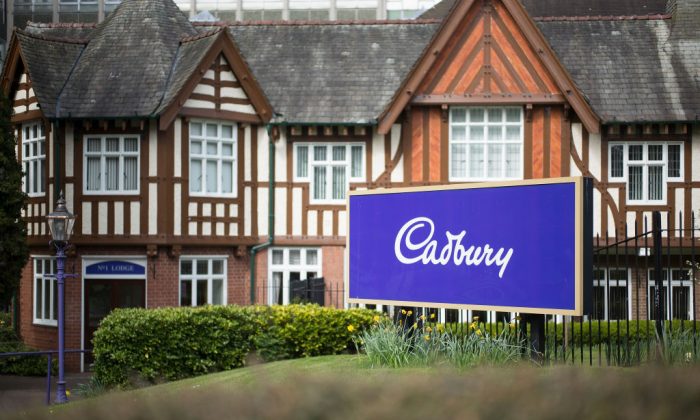 The entrance to the Cadbury factory in Bournville on April 5, 2017 in Birmingham, United Kingdom. (Christopher Furlong/Getty Images)
UK

LONDON—Cadbury’s is among one of the first companies in the UK to have an online advertisement banned under new rules that crack down on junk food ads aimed at children.

In the ruling on July 4, the UK’s Advertising Standards Authority (ASA) banned the chocolate company from marketing a storybook called “The Tale of the Great Easter Bunny,” which features children hunting for Cadbury-branded purple Easter eggs, because the ad was directed at children.

It breached new rules prohibiting the advertising of foods that are high in fat, salt, or sugar (HFFS) toward children under the age of 16.

ASA chief executive Guy Parker said, “The ban on HFSS ads in children’s online media is working, but it’s important that we enforce it rigorously.

“These rulings show that we’re doing that and will help advertisers understand where we’re drawing the line.”

Caroline Cerny, lead at Obesity Health Alliance, said, “Whilst today’s rulings should be celebrated, the complaints demonstrate the blatant ways in which the food and drink industry attempts to exploit loopholes in the rules.”

Christopher Snowden, head of Lifestyle Economics at the free-market think tank the Institute of Economic Affairs, however, says that banning ads isn’t the answer.

“It’s censorship of children and adults in order to protect children from images of Easter eggs. It’s pathetic,” he said.

“The fact that a tiny percentage of children eat too much of them [candy] is not a reason to be censoring the biggest industry in the country.”

He added that children under the age of 12 have very little disposable income.

“Their parents do their food shopping for them. This stuff is very rarely aimed at children, it’s always aimed at adults and they just use children as a Trojan horse to bring in all the laws and intervention that they want to bring in,” he said.

The ASA also banned four Facebook posts by candy brand Chewits about the character Chewie the Chewitsaurus and the Squashies “advergame” app in which players were challenged to match pairs of Squashies by flicking them toward each other.

The rulings are the first to result from legislation that came into force last July that bans the marketing of HFFS foods to children in non-broadcast media.

A spokesperson from Mondelez, which trades as Cadbury, said, “We will be taking the insights and views provided by the ASA as part of this ruling and applying those learnings to our future content so we can continue to build upon our longstanding commitment to not market directly to children under the age of 16.”

The advertising watchdog said filtering out children who have told social media websites they are under 16 is not good enough, because many children enter false dates of birth, and instead, advertisers needed to show that they are not aiming ads at under-16s.