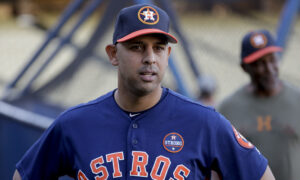 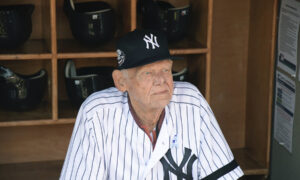 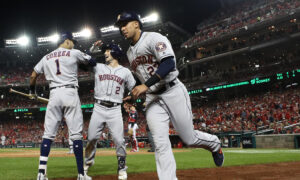 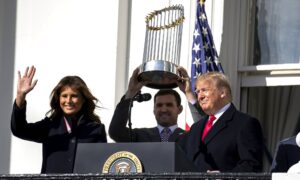 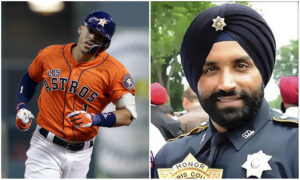 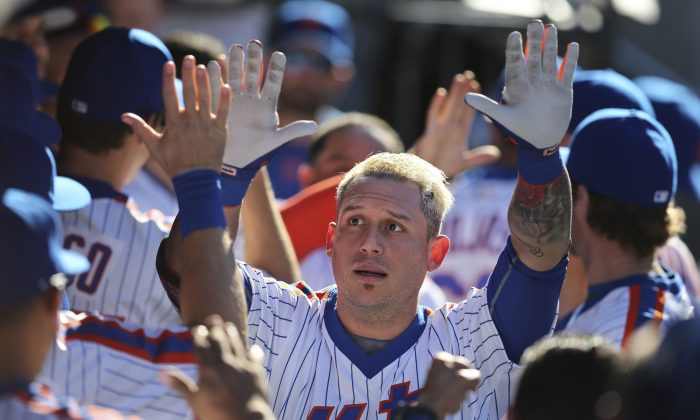 New York Mets' Asdrubal Cabrera is greeted by teammates during the seventh inning of the baseball game against the Philadelphia Phillies in New York on Sept. 25, 2016. (AP Photo/Seth Wenig)
Baseball

NEW YORK—The Mets circled the bases in record fashion like the cartoon Gas-House Gorillas in front of Bugs Bunny, then handed fans the shirts off their backs.

They hoped a 17–0 rout of the Phillies on a melancholy Sunday was not this season’s Citi Field finale.

“It really kind of sunk in today that it was the last regular-season homestand,” pitcher Noah Syndergaard said. “The clubhouse was like, we don’t want it to be the last game we play here this season.”

On a difficult day filled with sadness following the death of Miami star pitcher Jose Fernandez, the Mets produced the largest shutout victory in their 55-season history and the team’s highest-scoring game at Citi Field. Asdrubal Cabrera hit a seventh-inning grand slam, Jose Reyes had four RBIs with a two-run double and a pair of bases-loaded walks, and Curtis Granderson reached 30 home runs for the first time since 2012.

Even slumping Jay Bruce had his first multi-hit game since Sept. 4.

New York moved one game ahead of San Francisco for the NL’s top wild card, with St. Louis a half-game behind the Giants for the second spot, and fans chanted “We want playoffs!” in the ninth inning. Hoping for their first consecutive postseason appearances since 1999-2000, the Mets close with three games each at Miami and Philadelphia after finishing 44–37 at home.

“Hopefully spray some champagne,” he said.

New York improved to 23–11 on its stretch run with another pitching performance from a surprise fill-in. Robert Gsellman, a 26-year-old making his sixth big league start, allowed three hits over seven innings, struck out a career-best eight and walked two, leaving to a standing ovation. He also reached on a bunt single in the third for his first major league hit; Philadelphia’s defense was puzzling, given that Gsellman (3-2) has a torn left rotator cuff and can’t swing.

If the Mets reach the Division Series, the tattooed right-hander could get a start because of injuries to Matt Harvey, Jacob deGrom, Steven Matz and Zack Wheeler. Gsellman made his big league debut on Aug. 23.

“It kind of came pretty fast,” he said.

New York’s previous high for runs in a shutout was 14, against the Chicago Cubs in 1965 and Cincinnati in 1998. New York scored 25 unanswered runs after falling behind 10–0 in the fourth inning Saturday night.

Wearing 1986 commemorative uniforms for perhaps the last time this year, the Mets batted with the bases loaded 11 times in 50 plate appearance. Reyes came up with the bases full four straight times.

“We needed one of those,” Mets manager Terry Collins said. “Our bullpen was shot.”

In a matchup of rookie starters, Jake Thompson (3-6) allowed three runs and five hits in four innings, and the Mets abused Philadelphia’s bullpen for three runs in the fifth, five in the seventh and six in the eighth. Phillies relievers allowed 28 runs—27 earned—over 17 innings in the four-game series.

“I don’t think we got much length and then the bullpen came in and didn’t do our jobs,” said Frank Herrmann, who gave up Cabrera’s slam.

James Loney hit a run-scoring double-play grounder in the second, and Granderson led off the fourth by driving a 0-2 changeup into the bullpen in right center. Granderson has just 56 RBIs despite getting 30 homers for the fourth time—with 10 in his last 23 games.

Now the Mets head to Miami, where Fernandez will be honored before Monday’s game against the Marlins. The All-Star died early Sunday in a boating accident off Miami Beach.

“Tomorrow is going to be a rough one for everybody,” Collins said. “I’m sure they’re going to be all fired up to not only beat us, but in honor of Jose.”

At the suggestion of chief operating officer Jeff Wilpon, Mets star Yoenis Cespedes taped a No. 16 jersey with Fernandez’s name on a dugout wall. Like Fernandez, Cespedes defected from Cuba by boat.

“That’s not something that I would ever recommend to any ballplayer in Cuba, to maybe leave the way that we did,” Cespedes said through a translator, “but those who have I very much admire.”

New York hit a team-record 112 home runs at home and has 212 overall, also a franchise mark. Thirty-two of the homers were hit against Philadelphia.