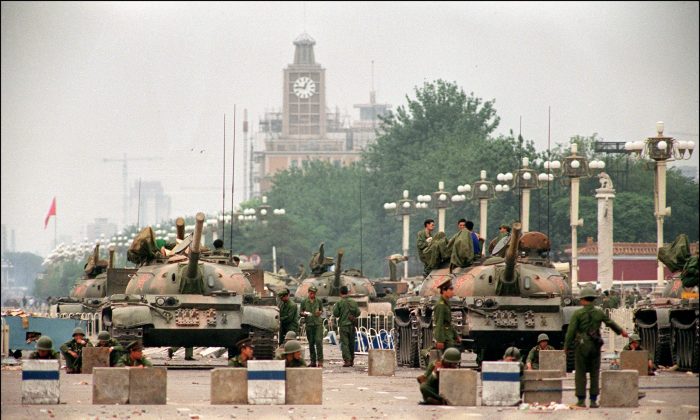 People’s Liberation Army tanks guard strategic Chang’an Avenue leading to Tiananmen Square on June 6, 1989. Canadian officials stationed in Beijing at the time described China’s Communist Party leadership as a “gerontocracy” that was “bereft of any credible claim to legitimacy,” according to cables obtained by Blacklock’s Reporter. (Manuel Ceneta/AFP/Getty Images)
Canada

Canadian officials in Beijing during the 1989 Tiananmen Square massacre had stark words about the bloody crackdown, according to cables sent back to Ottawa at the time that were recently obtained by Blacklock’s Reporter.

In the secret telex messages that Blacklock’s obtained through access-to-information laws, embassy officials described public killings and condemned the leadership of the Chinese regime.

The cables, which were under the control of Library and Archives Canada, recount the horrors of the crackdown.

Blacklock’s writes: “An old woman knelt in front of soldiers pleading for students; soldiers killed her,” the embassy reported; “A boy was seen trying to escape holding a woman with a 2-year old child in a stroller, and was run over by a tank”; “The tank turned around and mashed them up”; “Soldiers fired machine guns until the ammo ran out.” So many bullets were fired at Tiananmen that “they ricocheted inside nearby houses, killing many residents,”…

They are now entering a period of vicious repression during which denunciations and fear of persecution will terrorize the population.
— Cable from embassy officials

In the cables, Canadian diplomats described China’s Communist Party leadership as a “gerontocracy” that was “bereft of any credible claim to legitimacy.”

“In other messages, staff lamented the ‘astounding stories of corruption at the highest levels,'” reports Tom Korski, Blacklock’s managing editor and the author of the story. Korski is a former Beijing correspondent for the South China Morning Post.

The cables describe an encounter with the Swiss ambassador who told Canadian officials about the efforts of senior cadres to get money out of China.

“The Swiss ambassador, himself an ‘Old China Hand,’ told us that over the past few months every member of the Politburo Standing Committee has approached him about transferring very significant amounts of money to Swiss bank accounts. For obvious reasons, he has urged us to guard this information with the utmost care,” reads one cable Blacklock’s obtained.

The diplomats lamented they could get very little information due to many former officials having fled the country, being arrested, or being afraid to talk to foreigners.

According to the cables, Canadian diplomats in Beijing feared Chinese troops would “invade” the embassy in search of dissidents seeking asylum following the massacre.

“The embassy described the killings as ‘savage,’ recounting the eyewitness account of one survivor interviewed by diplomats,” reports Blacklock’s.

“The country is now being controlled by a group of vicious elderly generals and the government is run by people who will blindly follow their orders. The situation looks grim at best,” the embassy wrote in a June 15 message obtained by the outlet.

Another cable describes what appears to have been public executions.

“Shots were spaced at one-minute intervals and followed by what appeared to be cheers from a throng of people,” reads one cable quoted by Blacklock’s.

“They are now entering a period of vicious repression during which denunciations and fear of persecution will terrorize the population,” reads another cable.

Diplomats wrote of rumours that 1,000 executions had taken place, though they could not confirm the figures.

“It was probably thought that the massacre of a few hundreds or thousands would convince the population not to pursue their protests. It seems to be working,” they wrote.