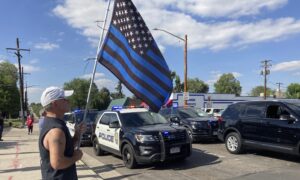 COLUMBIA, S.C.—A Charter Communications worker was killed in a South Carolina shooting and standoff that also wounded two public workers repairing a sewer main, a deputy, and a woman inside the home where the shooter was barricaded, authorities said.

The man who shot the workers fixing the sewer, 45-year-old Shannon Earl Smith, died from at least one gunshot wound at the hospital shortly after the standoff ended Thursday around 5 p.m., authorities said.

The cable TV worker killed and the woman wounded were inside Smith’s Spartanburg home during the standoff where officers also fired shots, said Greenville County Sheriff’s spokesman Lt. Ryan Flood, whose agency was asked to investigate because it was not involved in the incident.

The deputy was shot trying to get into the home after the workers were wounded, authorities said.

The public workers, deputy, and woman in the home are all expected to survive, investigators said.

Police were first called around 3 p.m. Thursday when Smith walked up to nine workers outside his home near Cleveland Park, asked them what they were doing, and then started shooting, Spartanburg Water spokeswoman Jennifer Candler said.

“It was just a regular project,” Candler told Fox Carolina. “There was no provocation. There was no warning.”

Spartanburg city officers and county deputies were fired on as they rushed to get into a home after the initial shooting because they feared someone might be hurt inside, Spartanburg police spokesperson Maj. Art Littlejohn said.

A deputy was shot in the arm and at least two officers fired back, said Spartanburg County Sheriff Chuck Wright, who added that Littlejohn tore down a bannister to get the wounded officer help as soon as possible.

City officers, county deputies, and the State Law Enforcement Division were all then involved in a standoff with Smith that ended with him shot, the Charter Communications worker dead, and the unidentified woman wounded, Flood said.

Spartanburg County Coroner Rusty Clevenger and Greenville County deputies are working to figure out who fired shots and who was hit by those bullets.

The investigation was turned over to the Greenville County investigators because it involved state agents as well as city and county officers.

McIntyre was a Spartanburg-based technician and worked for the company for nine years. He “was an expert at his craft,” Charter spokesperson Patti Braskie Michel said in a statement.

“Words cannot express our grief over the loss of our colleague, mentor, and friend. Our thoughts and prayers are with Perry’s family and loved ones,” Michel said.