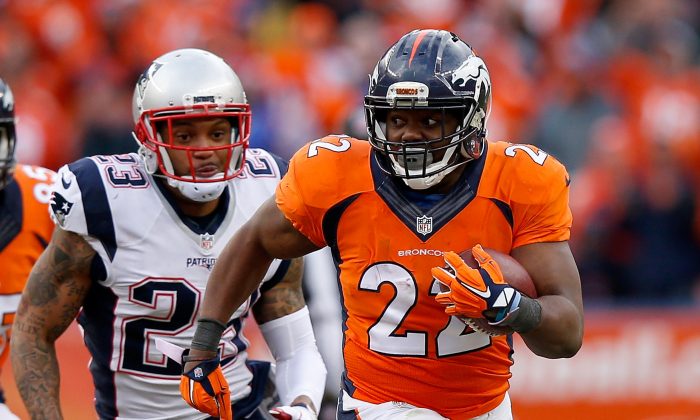 C.J. Anderson Shares Motivational Words Tom Brady Had For Him After Denver’s Win

Broncos running back C.J. Anderson carried the ball 16 times for 72 yards in Denver’s thrilling 20–18 win over New England in the AFC title. Afterwards he was congratulated by Tom Brady for not only his game performance, but for excelling in a league he wasn’t even drafted in.

“I know a lot of people hate this man but man when he was pick 199 and was over look he inspired me I was undrafted and over came all the odds so bless what he told me at the end of this game,” said Anderson via his Instagram post.

“He said ‘CJ way to fight and prove everybody wrong you belong in this league and your one hell of a player. I love the way you run keep climbing to be great.’ Those words meant so much growing up watching Tom overcame. I’m proud to say I’m 3–2 vs his teams and proud to say I get to battle him every year. Thanks Tom for telling me those words they will stick and I know a lot of people don’t like you but I have MAD RESPECT. Thanks. I see you overcome as others in this league and now it’s my turn.”

While all the coverage of the epic matchup was focused on what may be the final meeting between the two star-studded quarterbacks—Brady and Peyton Manning—Anderson may have more in common with the Patriots two-time MVP than Manning does.

While Manning was the first overall pick of the 1998 NFL Draft, Brady was a sixth-round pick of the Patriots two years later. The University of Michigan product was a platoon starter for the Wolverines but made the most of his opportunity when incumbent Drew Bledsoe went down early in the 2001 season. He’s held onto his starting job ever since while famously leading the Patriots to four Super Bowl championships.

Anderson somehow made the Broncos squad in 2013 as an undrafted free agent after rushing for 790 yards for a 3–9 California Bears team. After playing sparingly as a rookie in 2013, Anderson came on at the end of 2014 averaging 108 yards rushing over the final six games. The late-season surge ended with a Pro Bowl invite.

This year Anderson has rushed for 720 yards, but his biggest game in the regular season was against New England when he went for 113 yards in Denver’s 30–24 overtime win.