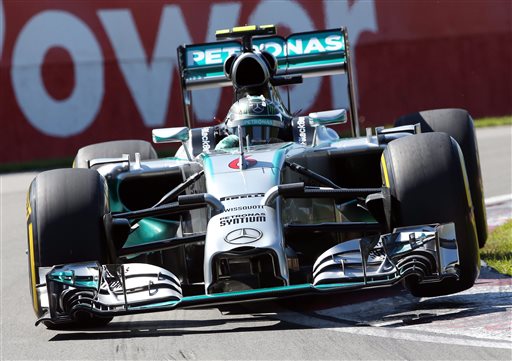 The Canadian Grand Prix F1 race is set for Sunday, June 8 after qualifying and practice over the last couple days.

It will be broadcast on NBC in the United States, Sky TV and BBC One in the United Kingdom, Channel Ten or Channel One in Australia, Sky Sport in New Zealand, and TSN in Canada.

It will also be shown on RTL in Ireland, on TSN in Canada, on OTE TV in Greece, on M1 in Hungary, Sky F1 in Italy, MTV Max in Finland, Polsat Sport in Poland, SLO 2 in Slovenia, Sport1 in The Netherlands, BBC in Belgium, RTL or Sky Deutschland in Germany, Nova in the Czech Republic, TV3+ in Denmark, SportTV in Portugal, Abu Dhabi Sports 2 in the United Arab Emirates, Star Sports 4 in India, and Fox Sports in Mexico, Central America, and South America.

Live streaming is available on NBC in the United States, Tenplay.com in Australia, SKY in New Zealand, TELMEX in Mexico, Foxplay.com in Central and South America, Star Sports in India, Sporting Telenet in Belgium, Nova in the Czech Republic.

Check out the lineup (with qualifying results), F1 standings, and an Associated Press preview below.

Mercedes driver Nico Rosberg of Germany leads his teammate Mercedes driver Lewis Hamilton of Britain during the Monaco Formula One Grand Prix, at the Monaco racetrack, in Monaco, Sunday, May 25, 2014. (AP Photo/Luca Bruno)

MONTREAL—For the third straight week, Mercedes teammates and championship leaders Nico Rosberg and Lewis Hamilton will line up for a Formula One race side-by-side in the front row of the starting grid.

If all goes as expected, they will finish in the top two again as well.

The dominant team on the circuit this year — winning all six races, with five second-place finishes as well — Mercedes claimed the top two starting spots for the Canadian Grand Prix in qualifying on Saturday. Rosberg, the points leader, earned the pole, and Hamilton will be next to him at the start of Sunday’s race.

“That was very important as there aren’t many opportunities to overtake here, particularly if you are in the same car,” said Rosberg, who earned his second pole position in a row and third for the year. “I think it will be a battle between the two of us out there tomorrow as the gap to the other cars was quite big.”

It’s the third straight race, and fourth overall, that Mercedes has a front-row lockout.

“It’s great for the team that we’re 1-2 — a really fantastic performance by the team,” said Hamilton, who won four consecutive races before finishing second to Rosberg in Monaco last month. “Let’s hope that we can make history tomorrow.”

During a sun-soaked qualifying run on Friday, when the track heated to 116 degrees Fahrenheit (47 Celsius), Rosberg had the fastest lap, completing the 4.361-kilometer (2.71-mile) Circuit Gilles Villeneuve in 1 minute, 14.874 seconds. Hamilton was second, just 0.079 seconds slower, and defending Formula One and Canadian Grand Prix champion Sebastian Vettel of Red Bull was third, about a half second behind.

“Obviously, we’re fighting a very big gap, and it’s difficult to close it in one round,” said Vettel, who is the four-time defending Formula One champion and the winner in Montreal last year by 14 seconds. “We’re not tickling all the right spots yet.”

Valtteri Bottas was just 0.002 seconds out of third, narrowly edging his Williams teammate, Felipe Massa, and Red Bull’s Daniel Ricciardio. But the gap between the Mercedes and the rest of the field showed no sign of narrowing.

“I expect that it’s going to be between the two of us, for now,” Rosberg said. “We have enough of the gap for now.”

Mercedes’ domination of Formula One has been nearly complete this year, with seven pole positions to go along with the six victories.

Rosberg is atop the championship standings with 122 points and Hamilton right behind him at 118. The next closest driver is Ferrari’s Fernando Alonso, who has 61 points.

“It gives me that little bit extra when I have the result behind my back,” Rosberg said. “To come here, having won the last race, it just helps a little bit. Lewis obviously had that winning streak, and to put that to an end helps.”

Hamilton, the 2008 world champion, has won three times in Canada. Rosberg’s best finish on the Ile de Notre Dame in the St. Lawrence River across from downtown Montreal was fifth place, last year.

Mercedes executive director Toto Wolff said having the two drivers pushing each other is part of what is keeping them in front.

“They are pushing each other so hard and, between every part of qualifying, they were looking at overlays of their laps, checking the data and trying to find every little advantage,” Wolff said. “(It) just goes to show there is no room for error when two drivers are fighting on such a high level.”

F1 Standings (With Points Only)