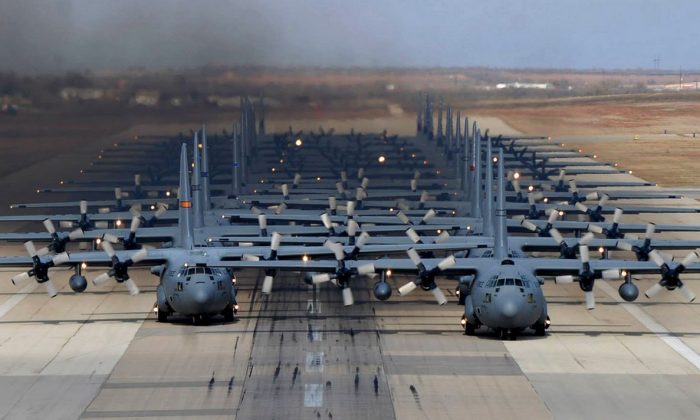 Twenty-four C-130 Hercules transports were photographed going down a runway in Texas as part of a joint exercise.

The move was part of the US Air Force’s Joint Forcible Entry Exercise, which also included 20 C-17 Globemasters.

More fighter and support aircraft and ground combat assets were in the training exercise.

At one point, 24 Hercules craft were shot heading down the runway. The process is known as an “elephant walk,” which are done at airbases to prepare for war-time operations.

“The Joint Concept for Entry Operations doctrine defines forcible entry as the seizing and holding of a lodgment in the face of armed opposition. The exercise tested the Air Force’s ability to tactically deliver and recover combat assets via air drops in a contested environment,” the Air Force said, per Jalopnik.

Added Capt. Cliff Caldwell of the 62nd Operations Support Squadron: “This is day one and night one of the war… This is us going in and taking all the training that we do and putting it all together and focus on application of combat skills.”

The exercise took place Dec. 6 at the Dyess Air Force Base, Texas.

The Exercise, which featured 100 aircraft in total, has the aim to test the ability of the participants in the weapons school courses to plan and execute synchronized aircraft movement from geographically-dispersed bases, large formations in a simulated contested battlefield.

The scenario includes missions to infiltrate and exfiltrate combat forces via airdrops and combat landings on degraded landing strips through heavily defended airspace.

The photo in this post shows the 24 C-130s taxiing in close formation right before a minimum interval takeoff, in what is referred to as an “Elephant Walk.” You can click on the image below to open a hi-rez version of the shot, and count the planes that are depicted in it.