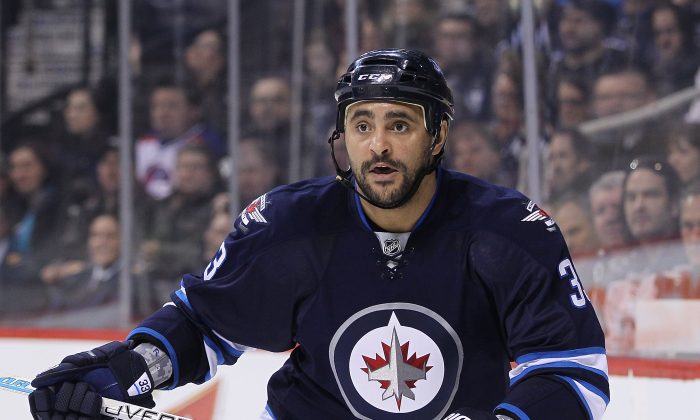 Dustin Byfuglien is seen in action against the Ottawa Senators at the MTS Centre on March 4, 2015 in Winnipeg. The big defenseman suffered an upper-body injury in that game and hasn’t yet returned to action. (Marianne Helm/Getty Images)
Canadian Content

Byfuglien More Than a Big Loss for Winnipeg Jets

There’s little doubt that Dustin Byfuglien has been the MVP for the Winnipeg Jets this season. Not to discount the excellent season Bryan Little is having, but “Big Buff” has been the engine that has driven the Jets in 2014-15.

The Roseau, Minnesota native started the season as a third line forward, but injuries to the Jets blue line forced Jets head coach Paul Maurice to move Byfuglien to defence.

This wasn’t new to Byfuglien. He was drafted as a defenceman by the Chicago Blackhawks after a stellar junior career with the Prince George Cougars of the WHL. The Blackhawks moved him to forward where he played a vital role in Chicago’s 2010 Stanley Cup victory.

When Byfuglien was traded to the Atlanta Thrashers in 2010, he was moved back to the blue line by then head coach Craig Ramsey. Byfuglien went on to score 20 goals that season, a franchise record for goals by a defenceman.

When the franchise relocated to Winnipeg in 2011, Byfuglien remained on defence, but was moved to forward in a desperate move to save then head coach Claude Noel’s job. It didn’t work out for Noel, but Maurice took over and left Byfuglien at right wing.

Byfuglien wasn’t happy as he told reporters at the end of the season that he hoped to start the season at defense, but would do what was asked of him. His time came when four d-men went down with injury in December. Maurice moved Byfuglien back to defence where he developed into a force of nature.

Byfuglien’s 6-5, 260-pound frame was used to smash and pulverize any unfortunate forward, who dared cross the blue line. But it wasn’t just his physicality that made the difference. He showed intelligence on the back end, making the proper outlet pass to get the puck out of the zone, or joining the rush for a scoring opportunity.

Then came the injury.

He [Dustin Byfuglien] just goes over you, he’s so big and he’s so strong.
— Paul Maurice, Head coach, Winnipeg Jets

In a seemingly innocent looking play, Byfuglien was battling Erik Condra of the Ottawa Senators on March 4 when he left the ice, favouring his right arm. He was sidelined for two weeks and the Jets were in trouble. Their once firm grasp on a playoff spot was suddenly slipping away and now they find themselves in a dogfight.

The good news for Jets fans is that Byfuglien returned to practice earlier this week, with hopes of being inserted to the lineup this week.

With a coveted playoff spot up for grabs, the Jets need every healthy body available. None more than Big Buff.

“I won’t give you the exact poundage,” Maurice told Sportsnet about how big a loss Byfuglien would be. “We’ll miss him. He’s a force back there for sure.”

Unlike Calgary’s top defensemen Mark Giordano, who plays a more cerebral game, Byfuglien tends to play an aggravating, aggressive game that tends to get under the opponents skin.

Maurice explains in an interview he gave to the Winnipeg Free Press.

“His ability to ‘tight-gap’ because of his physicality is as good or better than anybody we have on that blue line. When he closes on you, there’s not a lot of room to go.

“I think even maybe some penalties he takes is more the violence of the collision than evil intent. He just goes over you, he’s so big and he’s so strong. But we’re trying to play that tight-gap game, which means he’s going to get into collisions and when you’re that big, you’re going to anger some people.”

Dustin Byfuglien isn’t defined by numbers—other than his height and weight—but his contribution to the Winnipeg Jets makes him their MVP.

Jeremy Wiebe has written for The Hockey Writers and other web sites. A sports fan all his life, Jeremy follows hockey, football, and soccer with keen interest, but also dabbles in basketball and baseball. Currently residing in Winnipeg, his Twitter is @jstar1973