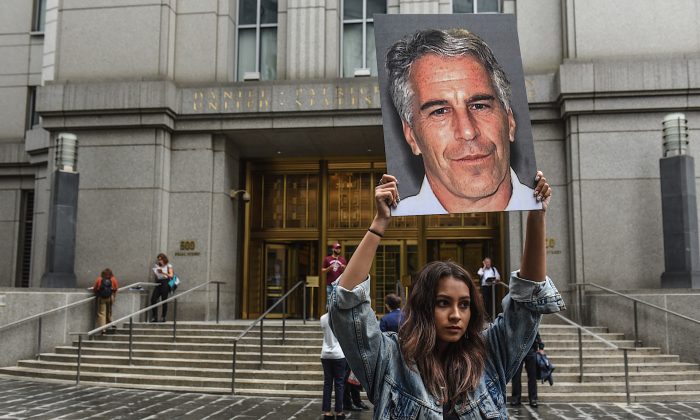 A protester holding a sign of Jeffrey Epstein in front of the federal courthouse in New York City on July 8, 2019. (Stephanie Keith/Getty Images)
Viewpoints

By Covering for Jeffrey Epstein, Can the Media Sink Any Further?

Epstein had been in the news often for the past several months, and the words “EpsteinCoverup” instantly generated massive buzz on social media. But ABC said that Robach’s interview with a key Epstein accuser didn’t meet its standards because it lacked sufficient corroborating evidence.

Epstein was arrested on sex trafficking charges in July, after an indictment against him was unsealed by U.S. Attorney for the Southern District of New York (SDNY) Geoffrey S. Berman.

Interestingly enough, the case against Epstein was being run out of the SDNY’s Public Corruption Unit rather than one of the divisions that would be expected to deal with sex trafficking, such as the Violent & Organized Crime division.

Epstein himself never held public office, so which current or former public officials were the target of the investigation?

In 2008, Epstein managed to get himself a sweetheart deal from the federal officials prosecuting him for running what was essentially an international sex trafficking ring. An airtight case was dropped against him and he got an extremely lenient house-arrest deal, while all his co-conspirators were allowed to remain uncharged and unnamed.

It quickly became clear following his arrest that there would be no sweetheart deal for Epstein this time. The feds literally didn’t need him to give them anything, because they already had it all.

And then, on Aug. 10, Epstein was found dead in his cell at the Metropolitan Correctional Center in New York City of an apparent suicide.

Despite Epstein’s death, both Attorney General William Barr and U.S. Attorney Berman stated that the SDNY’s Public Corruption Unit would proceed with the cases it was building, again confirming that Epstein himself wasn’t the main target of the investigation.

Intense speculation followed Epstein’s death as to whether he really committed suicide or was a homicide victim. Initially, some were hoping that O’Keefe’s promised video would deal with the controversy of a cover-up surrounding Epstein’s demise.

In the video released by Project Veritas on Nov. 5, Robach, who is the co-host of the “20/20” program, is seen lamenting to other ABC News staff that three years ago, her superiors at the network wouldn’t let her break the Epstein story, after she had accumulated what she described as an unbelievable amount of evidence.

Robach makes a telling comment, about the plane logs showing that Bill Clinton, Alan Dershowitz, and others traveled to Epstein’s private island. “It was unbelievable what we had … we had Clinton, we had everything.”

The Clinton that Robach refers to is undoubtedly former President Bill Clinton, who, flight logs reveal, traveled on Epstein’s plane at least 26 times.

Later in the video, Robach says: “There were a lot of men in those planes, a lot of men who visited that island, a lot of powerful men who came into that apartment.”

Viewers of the video immediately grasped the implication of Robach’s words. Three years ago was in 2016, right in the heat of the presidential election, when Bill Clinton’s wife, Hillary Clinton, was running for president of the United States against Donald Trump.

All of the people alluded to by the Epstein accuser in the Robach interview have denied any wrongdoing or involvement in Epstein’s alleged sexual misconduct.

The Project Veritas video immediately went viral, garnering more than 2 million views in just five days. ABC News’ retaliation for being exposed by this leaked video was swift and brutal. And, as it so happens, very likely carried out against the wrong person.

After checking video access records, ABC contacted CBS News to alert them that a news producer who had just left ABC to come work for them, Ashley Bianco, was the suspected whistleblower. CBS News then promptly fired Bianco, who was then interviewed by Megyn Kelly. Bianco denies ever having met O’Keefe or having given him the Robach video.

In response to Bianco’s firing, O’Keefe has repeatedly insisted that not only is Bianco not the whistleblower, but he also claims that the person who gave him the Robach video is still employed by ABC. In fact, O’Keefe is claiming to have more videos that he’ll be releasing soon.

O’Keefe then went on to publicly post a letter purportedly written by the actual whistleblower.

As of Nov. 9, a full four days after the story broke, neither CNN or CBS has breathed a word of this scandal to its viewers, something O’Keefe was quick to point out on his Twitter account.

“If you only read the New York Times and watch CNN, you’d know NOTHING about the ABC Epstein Cover up Robach story and CBS News firing an innocent woman.  They haven’t mentioned it.

Let that sink in for a minute.

Now tell me why we should only trust ‘legitimate’ news orgs.”

So what are we to make of this fascinating, ongoing scandal that’s developing? Here’s my initial take.

The Epstein cover-up is a massive media scandal because it starkly demonstrates what the actual nature of the mainstream media has become. And that nature is to protect the powerful elite at all costs, no matter what crimes they’ve committed, while hunting down and persecuting the innocent, based on what often turn out to be lies.

Before the media’s lunacy during the Kavanaugh confirmation battle had run its course, we had all watched stories being aired and published, in which Kavanaugh had ludicrously been accused of orchestrating gang rapes.

Jesse Watters of Fox News had some well deserved harsh words for ABC News in the light of the stark contrast between its non-coverage of Epstein vs. the way it tried to destroy Kavanaugh and his family.

“What the hell are ABC News’ editorial standards? ABC smeared Kavanaugh with 40 year old hearsay. No corroborating witnesses, no evidence, no pictures, nothing.”

And while they’ve been covering for powerful elites such as Harvey Weinstein, Matt Lauer, Bill Clinton, and others, we’ve watched the media unleash itself on private citizens, people like  Carpe Donktum, a forklift operator, or a woman who simply posted something on her Facebook page.

You can neither respect nor trust people who would do this kind of thing. That’s why the Epstein scandal is only going to grow.