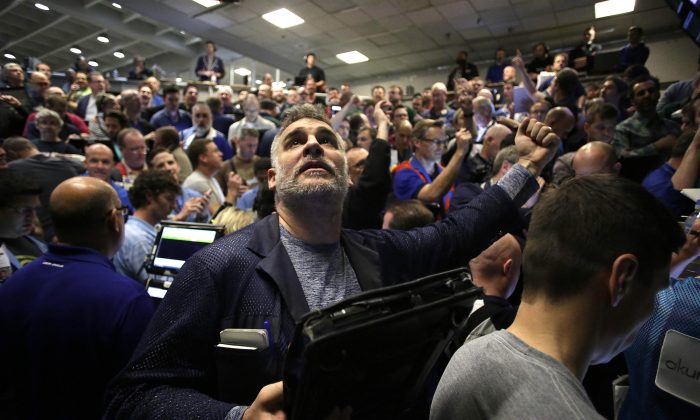 Traders in the Standard & Poor's 500 stock index options pit at the Chicago Board Options Exchange (CBOE) react after it was announced that they Federal Reserve would increase interest rates, in Chicago, Ill., on Dec. 16, 2015. The Federal Reserves raised the interest rates for the first time since 2006 by 0.25 percentage points. (Joshua Lott/Getty Images)
Business & Economy

WASHINGTON—For anyone considering whether to buy a home or car, the Federal Reserve’s interest rate increase Wednesday shouldn’t make much difference.

The rates that most people pay for mortgages, auto loans or college tuition aren’t expected to jump anytime soon. The Fed’s benchmark interest rate has limited influence on those things.

Still, the Fed’s move to lift its key rate by a quarter-percentage point will raise short-term borrowing costs for banks. And that, in turn, is intended to prod banks to boost certain other rates. Rates on credit cards and home equity loans and credit lines, for example, will most likely rise, though probably only slightly.

The rate the Fed controls is only one factor among many that can influence longer-term borrowing costs. And the Fed made clear it will assess the economy’s health before raising rates further.

“Loans that are linked to longer-term interest rates are unlikely to move very much,” Fed Chair Janet Yellen said at a news conference. “Credit card rates … might move up slightly. But remember, we have very low rates, and we’ve made a very small move.”

Mortgage rates tend to move in sync with the yield on 10-year Treasury notes. When inflation remains as low as it is now, Treasury notes, with their modest returns, are considered a safe and decent investment. And heavy purchases of Treasurys by U.S. and foreign investors—and by many foreign governments, such as China—help keep those yields low.

“The demand for Treasurys has mushroomed,” said Carl Tannenbaum, chief economist at Northern Trust. “What that means is that for any given monetary policy, interest rates are still going to be lower than they would have been 10 or 15 years ago.”

The Fed’s decision to raise rates is in many ways a healthy sign: It’s a vote of confidence that the economy, 6½ years after the Great Recession officially ended, can finally withstand higher borrowing costs and keep growing at an acceptable pace.

Even with a rate increase, most economists expect consumer spending to stay heathy and solid hiring to continue, perhaps even driving unemployment even further below its current low level of 5 percent. Should the economy stumble, the Fed could postpone further rate increases.

Other trends are also working in consumers’ favor: Gas prices are still falling, and there are signs that paychecks are finally starting to rise after years of sluggish growth.

“These things are good for the consumer and will easily outweigh the impact of a rate increase,” said Chris Christopher, an economist at forecasting firm IHS Global Insight.

The most visible effects of the Fed increases will probably be in short-term borrowing. Rates for credit cards and home equity lines of credit should rise, typically by the same amount as the Fed’s increase. The increases could appear as soon as one or two months after the Fed’s action. Those rates are tied to banks’ prime rate, which responds quickly to the Fed’s changes.

Also, Americans with adjustable-rate mortgages will probably face a higher rate at the date of their next adjustment. Auto-loan costs may rise as well, economists said, though not as fast as the short-term rate the Fed controls. Auto-loan rates typically follow the yield on two-year Treasurys.

“The interest rate impact on the typical household from a quarter percentage point move is almost inconsequential,” he said. “Most people won’t even notice.”

And most people buy homes for reasons that have little to do with a slight rise or fall in mortgage rates, McBride said. They tend to buy when they feel financially secure or experience a major life change, such as having children.

“All those reasons people buy houses remain the same, whether mortgage rates are 4 percent or 4.25 percent,” McBride said.

Last month, Doug Lewandowski moved up the closing date on his purchase of a two-bedroom Chicago condo so that he could lock in his rate. He has seen mortgage rates rise by a quarter-point since he started looking in August. Still, the timing of the Fed’s move wasn’t a big factor in his decision.

“I didn’t want rates to jump up significantly,” he said, “but I wasn’t willing to settle on a place just to get a lower interest rate.”

Lewandowski’s outlook, if typical of prospective homeowners, is one reason many economists think home sales may rise next year even if mortgage rates tick up.

Many analysts expect the Fed to gradually raise its short-term rate by a total of 1 percentage point by the end of 2016. If so, Frank Nothaft, chief economist at CoreLogic, forecasts that the average 30-year fixed mortgage would rise from roughly 4 percent to about 4.5 percent.

To put that in perspective, before the Great Recession the 30-year fixed mortgage rate never fell below even 5 percent.