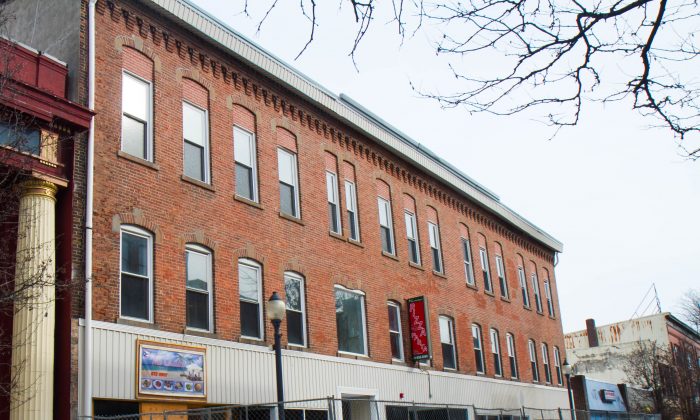 Buyers Ready, Willing, and Waiting for 24-32 Front St. in PJ

If you had asked Jim Blanton if he and his partner Daniel Radtke were going to buy 24-32 Front Street in Port Jervis three months ago, he wouldn’t have given a definitive answer.

Major and immediate work needed to be done on the building’s roof, part of which had caved in, and clearing the title to be able to start the work was what the mayor described as an “uphill battle.” When asked about the cost of the renovations, Radtke described it as a “black hole.”

Not much has changed in three months—the roof still needs to be repaired and the title has yet to be cleared—but now the two are committed to buying the building, and they already have plans for what they’re going to do with it once it’s theirs.

“Pending clearing the transfer of the title, it’s a done deal,” Blanton said in a Jan. 22 phone interview.

The city has taken over the foreclosure process from the bank and has put “a lot of time an energy” and “gone out of their way” to expedite the title-clearing process, Blanton said.

The last time he talked to his attorney, he was told the title could be cleared by the beginning of March at the latest. In the meantime they have been getting things ready so they can “move quickly” on the renovations once the title is transferred over.

“We’re nervous about it, but hopeful and excited about it,” Blanton said.

Twenty-four thirty-two Front Street is a three-story brick building built in 1936. The large building, which tax records show has 22,802 square feet of floor space, is smack dab in the middle of Port Jervis’ downtown. The first floor is all retail units, which will stay the same, and the second and third floors will be converted into apartments.

Despite not yet having ownership of the building, Blanton has already been in talks with several business owners who are interested in the bottom floor retail space. He said he was surprised by how much interest there is in the building and feels encouraged that so many of the businesses approaching him were established in the area already.

“The type of businesses we want in town, with good track records and good experience,” he said, without giving details as to what the businesses are.

Blanton has already been in talks with several business owners.

Some of the bottom floor units are in fairly good shape, he said and besides aesthetic changes that the new tenant will want to make, will need very little work to be habitable. Only one he cited as needing significant work.

The first priority will be fixing the roof though.

City building inspector Dave Rivera estimates there is about a 20 by 20 foot hole in the roof, which he checks weekly to make sure “critical areas” have not worsened.

Since April they have not, he said, but the sooner it can be fixed the better.

“The ability to renovate is there, it obviously just has to be done within a certain period of time,” he said in a phone interview.

In the meantime, the city has put a fence around it, which blocks off the sidewalk just in case something were to fall from the building.

The building was condemned in September, which was the impetus behind Blanton and Radtke’s offer to buy it. Blanton said it would be “devastating” to the downtown to see a “great old building” like that torn down, and from his experience rehabbing old buildings in Port Jervis, he thought it could be put to good use.

There is a ‘ready market for good tenants’ in Port Jervis.

He said there is a “ready market for good tenants” in Port Jervis, referring to the apartments on the second and third floors, which will be the last phase of the project.

They have plans to make “really nice, interesting loft apartments … that we think will really appeal to the type of people who we want to encourage to come into Port Jervis,” Blanton said.

He, like others, has noticed the burgeoning business district on Front Street and is encouraged by its synergy and its potential to draw more people to the downtown, both to live and work.

Just within the last five months, three buildings on Front Street have been bought and are being renovated, and the Front Street Café just opened its doors on Dec. 15. Around the corner, Pike Plaza is undergoing renovation with the development company saying tenants will be in there by summer.

Radtke and Blanton, who have been living in Port Jervis for over 14 years and have developed other properties in the city, said they have never seen anything like this.

“Fortunately for us this is happening at a good time,” Blanton said. “This will help us with our project and make it more doable.”