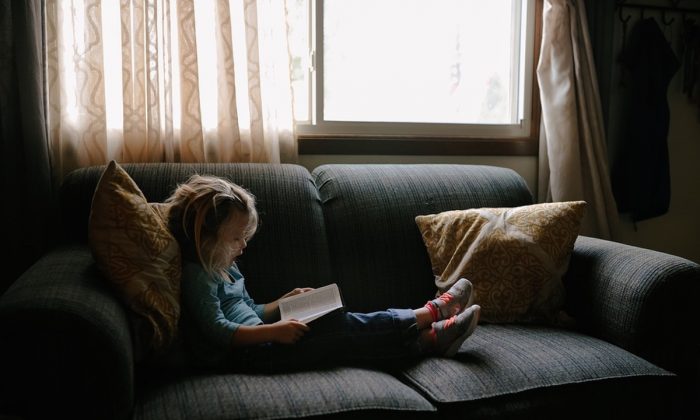 Stock image of a child on a couch. (StockSnap/Pixabay)
Southern California

A 2-year-old shocked her mother by buying a $430 couch on the Amazon app while playing on her phone.

Isabella McNeil is now thinking twice about handing her cell phone to her daughter. “I was just so shocked,” McNeil told NBC 7 on June 27. “I thought, ‘Did I buy a couch in my sleep?'”

McNeil was browsing for couches on her Amazon App last week in San Diego. When her youngest daughter Rayna pestered her, “Mama, phone. Mama, phone,” she relinquished it without closing the app.

Rayna unwittingly clicked “Buy now with 1-Click” and ordered the $430 grey tufted couch, according to NBC7.

A few days later McNeil received a message on her phone while at work that said, “Your couch has shipped.”

“I was just so shocked,” San Diego mom Isabella McNeil explained. “I thought, ‘Did I buy a couch in my sleep?’” https://t.co/0PWlySrbmb

The mother wondered when she would have ordered a couch. “I said, ‘What? My couch has shipped? I didn’t remember ordering a couch.'”

It did not take her much time to figure out what had happened. “Lesson learned,” McNeil told NBC7. “Now I know it’s really dangerous and [I need] to make sure the Amazon app is closed before my daughter takes the phone. It’s just so easy.”

Initially, she sought to cancel the order but it was too late. The sofa arrived soon after.

She tried to find ways to return it, but learned that there was a $79 restocking fee in addition to $100 for the return delivery. She realized a better option was selling the brand new item on OfferUp, Facebook Marketplace, or Craigslist.

“Brand new in box. Ordered it by mistake, my toddler actually did…darn buy with 1 click on Amazon. Anyway, it’s more of a hassle to ship back, so I’ll take a loss. I paid 431 with tax and am willing to let it go for 300 must pick up,” said her ad on OfferUp.

McNeil remained in good spirits despite the error. She said she wants other parents to learn from her mistake. Parents should be aware of when and how they are handling their phones around their kids, she said.

“Make sure all of the apps are closed, make sure your passwords are fingerprint-locked, make sure they don’t know your number password, because kids are a lot smarter than we think,” she said.

McNeil discussed what parents usually do when they hand their phones to their children.

“Sometimes, when you’re a mom and you’re just in that desperation and you just kind of want them to settle down, the first thing you go to is, ‘Here, play with my phone for a little bit,’” she said.

The mother, however, couldn’t prevent her toddler from snatching her phone when NBC7 called her for an interview. “They just like to play,” she said, while taking the phone from Rayna’s hands.

And Rayna’s hands had again played the trick—this time it was Zillow, a real estate app. “See? That’s why I need to lock this,” McNeil said, laughing over the phone. “She’s about to buy a house on Zillow.”

In a similar incident, a 6-year-old secretly purchased toys worth $400 from her mother’s Amazon account.

Katelyn Lunt from Utah was so excited when her mother bought her a Barbie doll online that she decided to help herself to more of the toys.

“She wanted to get on and see when it was going to arrive,” her mother, Catherine, told PEOPLE. “When I left the room she went crazy and ordered what she calls a ‘Barbie Collection.’”

Lunt became aware of this only when she checked another order on Amazon. “I saw a few items that I didn’t recognize and I was able to cancel them,” she recalls. “But then, as I kept looking, there were two or three pages of items that had already shipped!”