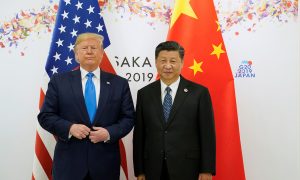 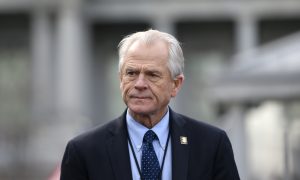 'No Reasons to Inflict Harm on Ourselves,' Says Navarro of Decision to Delay Tariffs on Some Chinese Goods
0 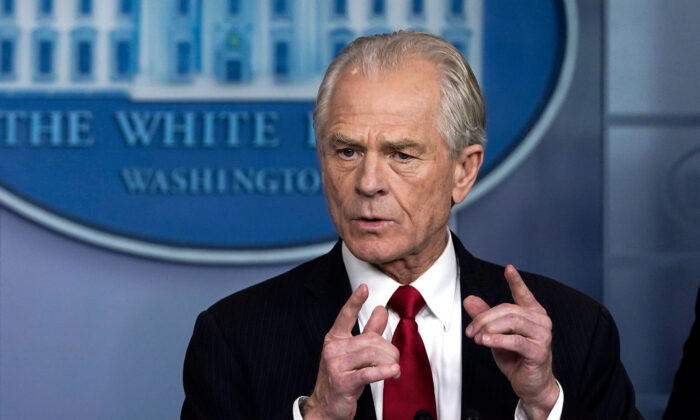 White House Trade and Manufacturing Policy Director Peter Navarro speaks during a briefing on the CCP virus pandemic in the press briefing room of the White House on March 27, 2020. (Drew Angerer/Getty Images)
Economy

White House trade adviser and Defense Production Act (DPA) coordinator Peter Navarro said on May 17 that the essence of the Trump administration’s plan to rebuild the U.S. economy is to “buy American, deregulate, and innovate.”

Navarro, director of the White House Office of Trade and Manufacturing Policy, told NBC’s “Meet the Press” and ABC’s “This Week” that President Donald Trump’s administration plans to pursue policies to bring key supply chains back to the United States, as concerns continue to mount about the country’s dependence on China, now amplified by the CCP virus pandemic.

“This president built up the most beautiful economy in three and a half years, and the Chinese Communist Party [CCP] crippled that in 30 days,” Navarro told NBC’s Chuck Todd on May 17.

“He is going to rebuild this economy based on three things: buy American, deregulate, and innovate,” he said. “We’re going to start by bringing home the pharmaceutical and medical supplies chains here, using things like the DPA and other private sector enterprises.”

Nearly 36.5 million Americans have filed claims for unemployment benefits since mid-March, with 2.981 million for the week ending May 9, according to the Labor Department.

“That is where this Trump ship is heading—it’s jobs, it’s buy American, it’s make stuff here,” Navarro said. “And for every service sector job we may lose in this transition, we’re going to replace those with manufacturing [jobs], and things are going to be great.

“Bring the jobs home and make it here,” Navarro told ABC, adding that Trump’s buy American, deregulate, and innovate agenda will benefit both the economy and national security.

The White House trade adviser made reference to the swift production of ventilators by General Motors and ventilator firm Ventec Life Systems on “domestic soil” after Trump invoked the DPA in late March.

“We had a serious crisis back at the time. This was a miracle, and in some sense a microcosm for the future,” Navarro told NBC. “Using the DPA … 700 pieces go into that ventilator, and General Motors was able to use its manufacturing platform to go out to its supply chain to replicate virtually all of those here on domestic soil.

“So using the DPA, we were able to move at an incredible speed, innovate, and bring ventilator production right here on domestic soil.”

“We can replicate that throughout this economy, repurposing our factories,” Navarro told ABC. “This is the jobs president, the innovation president, the manufacturing president, and this is how we’re going to get through the other end of this—this crisis here.”

Navarro’s remarks came just days after Trump said the pandemic highlights the vulnerabilities of supply chains whose components are located in different parts of the world.

“We have a supply chain where they’re made in all different parts of the world,” Trump told Fox Business’s Maria Bartiromo on May 14.

“And one little piece of the world goes bad, and the whole thing is messed up,” Trump said, referring to the virus outbreak in Wuhan, China.

“We should have them all in the United States,” said the president, who has long pledged to bring manufacturing of key supply-chain components back from overseas.

The president told reporters on May 14 during a visit to a Pennsylvania distributor of medical equipment that his goal is “to produce everything America needs for ourselves and then export to the world, including medicines.”