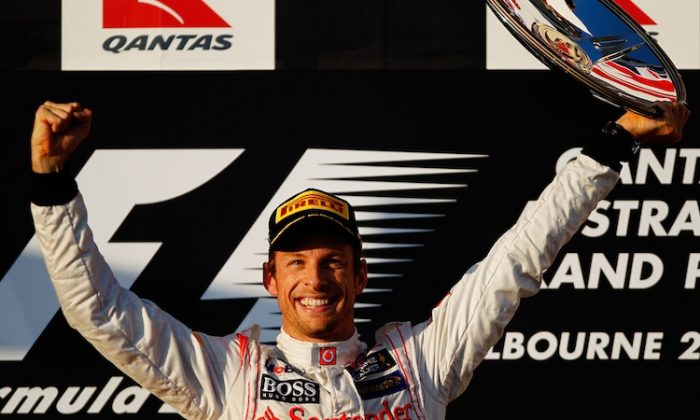 After announcing that McLaren was the car to beat by sweeping qualifying, Jenson Button and Lewis Hamilton proved it by finishing first and third in the 2012 Formula One Australian Grand Prix.

The win was Button’s third in four Australian Grands Prix. The British driver gave credit to his team, which worked hard all winter to close the performance gap to the Red Bulls, which were in their own class in 2011.

“We knew that if we could have a good winter we would really do very well at the start of the season—and we showed it today,” Button told formula1.com. “I feel so much at home in the car, which is so important for me. It gives me a lot of confidence and hopefully we will see a lot of it this year. The last two seasons have been tricky for us at the start of the year, so this is going down very, very well for us.”

Lewis Hamilton was fastest in qualifying, but Button passed him at the start—sensibly, the two managed not to wreck fighting for the first turn. After that the McLaren drivers stayed comfortably ahead until lap 36, when the team perfectly executed a risky stacked pit stop (one driver came into the pit stall just as the other left.) Red Bull’s Sebastian Vettel had stretched his fuel an extra lap, and came in under yellow, coming out ahead of Hamilton.

The end of the race, so often a parade, was instead packed with action, as three pairs of drivers battled for position. Vettel tried his best to catch the flying Button, who put in two blazing laps after the restart to escape the field. Button was simply too fast, despite Vettel reeling off fastest laps in pursuit.

Hamilton is harder on his tires than Button; while Button was able to protect his lead Hamilton began slipping back into the clutches of Red Bull’s other driver, Mark Webber, who had surprisingly out-qualified his twice-champion teammate. Hamilton kept his position, but the uncertainty added to the drama of the race.

Behind Webber was Fernando Alonso, who had wrestled his Ferrari into fifth, but could barely keep ahead of Pastor Maldonado’s Williams. This was the closest fight—until Maldonado tried a little too hard on the final lap, smacked a curb, half-spun, and went head-on into the wall, ending his race.

There was also a less spectacular driving display: Felipe Massa, trying to hold of Bruno Senna, ran wide and wider until the pair touched—hard—shredding bodywork and ruining both cars. The race stewards may yet penalize both drivers.

The 2012 Formula One Grand Prix season started with a series of surprises, the first being, that at least in Australia, Red Bull did not have the car to beat; rather, it was McLaren which swept the front row in qualifying and dominated the race.

Other surprises? Lotus might actually be a force in F1 again. Romain Grosjean qualified third in his Lotus-Renault, though he retired early in the race, while former world champion Kimi Räikkönen finished a respectable seventh in his first race back.

Williams is another team which might be heading back towards the sharp end of the grid: Pastor Maldonado has apparently brought enough sponsorship money to the team to get it back into contention. Though he crashed seconds from the end of the race, and finished 13th, the Williams driver spent the last twenty laps harrying Ferrari’s Fernando Alonso. Yes, Ferrari has a lot of work to do on their car, but Maldonado kept up with one of the best drivers in the world—a little more speed on the straights and he might have ended on the podium.

Jenson Button summed up everything in a radio transmission to his team as he crossed the finish line: “What a great way to start the season!”

The Formula One season continues with the Malaysian Grand Prix on March 25. Tickets and travel packages are available through formula1.com.