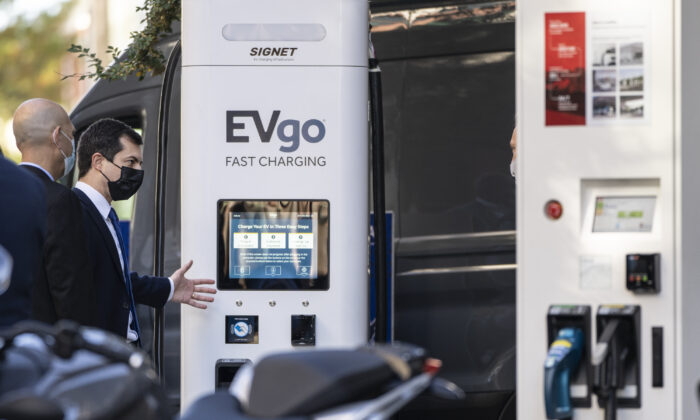 U.S. Secretary of Transportation Pete Buttigieg looks at an EVgo charging station during an electric vehicles event outside of the Department of Transportation in Washington, DC on Oct. 20, 2021. (Drew Angerer/Getty Images)
Business Columnists

Buttigieg to Consumers: Fight Inflation by Spending Tens of Thousands to Buy an Electric Car

Transportation Secretary Pete Buttigieg, whom some Democrats see as President Joe Biden’s successor, told MSNBC over the weekend that thanks to “incentives that make it more affordable to buy an electric vehicle” in the Build Back Better bill, “families thinking about getting an EV … once they own that electric vehicle, will never have to worry about gas prices again.”

The makers of electric vehicles themselves—including EV guru Elon Musk, CEO of Tesla—have declared the Democrats’ green transportation bribes to be a politicized sham. Biden’s proposals would augment the current $7,500 electric vehicle tax credit with a $4,500 credit restricted to the purchase of vehicles assembled by organized labor within the United States. That leaves out, for instance, the 136,000 American workers employed in Toyota’s 10 U.S.-based manufacturing facilities and 1,500 dealerships.

One of the big reasons for Tesla’s innovative and unexpected successes has been its bypassing of the increasingly anti-worker United Auto Workers and its perennial outrageously lavish demands and corruption, which for decades car buyers have been paying for in the sticker price.

“Shameless,” Musk’s “Tesla Facts” wrote on Twitter a month ago, pointing out that “the infamous $4,500 ‘UAW bribe’ in the ‘Build Back Better Act’ (H.R. 5376) excludes employee-owned U.S. car factories, such as Tesla, even if they form a union (!). It defines ‘Domestic Assembly Qualifications’ in a way that requires” that more than half of the workers be nonshareholder employees.

So even when the most visionary and productive entrepreneurs share their profits with the workers they employ, this administration is so joined at the hip with corrupt, self-serving Big Labor that it punishes them—even including a liberal, environmentalist one like Musk, who has given significantly to Democratic candidates and who quit President Trump’s CEO economic advisory panel in protest against the U.S. departure from the Paris climate accord. In 2020, Tesla gave more than ever before—over $660,000—to Democrats, while giving less than 9 percent of its political contributions to Republicans. But all that booty failed to buy even someone as green as Musk immunity from the Democrats’ class warfare.

Then there’s the price of these vehicles and the built-in problems their buyers find themselves parked with, which make it clear that emptying your bank account to buy one is a ludicrous means of fighting inflation.

The Nissan Leaf, for example, the world’s all-time best-selling plug-in car as of two years ago before it was overtaken by Tesla, starts at $27,400, plus over $1,600 for a portable charge cable and a future bill of between $4,500 to $8,500 plus labor to replace your battery when it degrades, hopefully after working at 100 percent capacity for 100,000 miles. Its current range on a full charge is about 225 miles, which might or might not get you through the 5-hour drive from New York City to Washington. Fully recharging the battery from empty can take as little as four hours or as much as eight.

If that isn’t enough range for you, you can purchase the much-celebrated, million-selling Tesla 3 and get about 265 miles on your battery for a shade under $40,700, with a full charge taking six hours.

CurrentAutomotive.com, while noting that “the vast majority of electric vehicle drivers never need to worry about paying to replace” their car’s massive battery apparatus, documented how one Tesla 3 owner found himself spending nearly $16,000, including over 13 hours of labor, to replace his battery following a mishap involving a large rock, a circumstance the owner found to be uncovered by the 8-year-or-100,000-mile, whichever comes first, Tesla warranty.

You could also apply your current $7,500 federal tax credit to the Ford Mustang Mach-E SUV, which starts at a shade under $43,000 and whose standard battery will get you 230 miles. In a Ford-supported publicity stunt last summer, three men in Britain drove 840 miles in a Mach-E, to demonstrate that electric cars were viable for “real-world long-distance use.” But, at variance with the real world, the air conditioning was kept off, “the windows closed and the radio was not used, and the team traveled through the night to avoid any traffic congestion.” The trip, utilizing “top-drawer driving skills … months of planning,” and “selecting and testing the right car for a journey of hundreds of miles” made it into the Guinness Book of World Records in spite of it taking no less than 27 hours.

To illustrate the stark comparison between electric and fossil fuel, the current record holders for the over 2,900-mile Cannonball Run from New York City to the Pacific Coast near Los Angeles completed their more than three times as long journey in less time than that: 25 hours and 39 minutes, traveling in their gasoline-powered Audi S6 (whose modifications included an extra tank in the trunk holding 67 gallons).

Buttigieg’s insulting suggestion to American consumers is another manifestation of the mindless environmentalist extremism that has come to possess the Democratic Party. The left say they want you to drive green, but they really don’t want you driving at all. Democrats’ ultimate goal is to take Americans’ cars—electric included—away from them, along with the profound individual freedom that comes with the ability of families to drive down the block or across the country at any time of their choosing.

Transportation for America, an activist group run by Beth Osborne, an Obama administration assistant secretary of transportation who was on Joe Biden’s shortlist for the cabinet post that ultimately went to Buttigieg, issued a report on a skewed poll it co-sponsored a year and a half ago, which actually claimed to have found that Americans don’t like cars. The report posited that “Voters consider cars to be nuisances” and “cars are an unwanted necessity.”

The truth, of course, is that since World War II, having your own car has been and continues to be at least as much part of the American Dream as owning your own home. Americans adore their cars, so much so that today, in spite of a new car costing an average exceeding $46,000 this year—over $5,200 higher than last year—in the new inflationary environment, only 16 percent of Americans were delaying their purchases of new vehicles in hopes of holding out for the prices to come down. (Odd behavior indeed in pursuit of a supposed unwanted nuisance.)

Secretary Buttigieg let the cat out of the bag. By limiting Americans’ mobility, the left would replace the individual’s pursuit of happiness, which our Founding Fathers recognized as a right, with the government’s pursuit of dependency for all. The Biden administration is spending America into a world in which each of us must always look to the state to get us from here to there, our privacy sacrificed day after day in communal carriages packed with strangers.