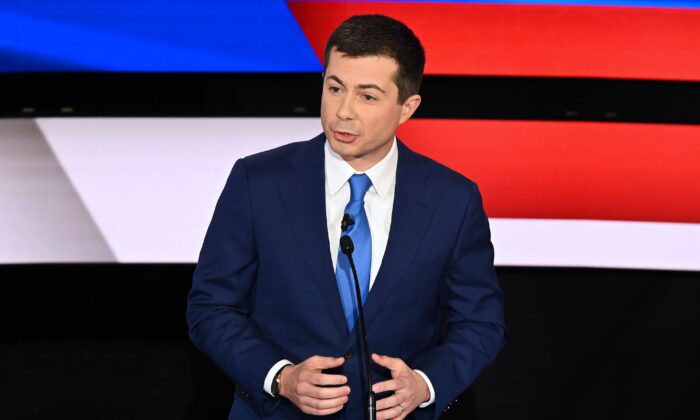 South Bend Mayor Pete Buttigieg stood by his plan to make some colleges free for most Americans, but not the richest ones.

Asked why he’d block out rich people from free college when they can access public libraries and other public services, Buttigieg said during the debate on Tuesday night: “It’s simple. We expect and hope for everyone to get through 12th grade. It’s not the same for college.”

“I don’t want cost ever to be a barrier to somebody seeking to attend college, and under my plan, it won’t be. Matter of fact, for the first 80 percent of Americans by income, it is free—at public colleges. But if you’re in that top income bracket, don’t get me wrong, I still wish you well, I hope you succeed when you go to college—I just need you to go ahead and pay that tuition,” he added.

“There is a real choice about what we do with every single tax dollar that we raise. And we need to be using that to support everybody, whether you go to college or not.”

He added later: “We gotta be making sure that we target the tax dollars where they will make the biggest difference,” he said. “And I don’t think subsidizing the children of millionaires and billionaires to pay absolutely zero in tuition at public colleges is the best use of scarce taxpayer dollars.”

Sen. Elizabeth Warren (D-Mass.) spoke next and called for a tax on the rich.

“We need a wealth tax in America. We need to ask people with fortunes above $50 million to pay more,” she said.

“What we really need to talk about is the bigger economic picture here,” she said.

Warren’s plans include universal childcare and Medicare for All, partially funded by a broad wealth tax.

Buttigieg’s plan (pdf) that includes college, “An Economic Agenda for American Families: Empowering Working and Middle-Class Americans to Thrive,” calls for about $1 trillion in new federal spending in housing and child care, as well as spending $500 billion on lowering costs for college.

“College costs squeeze families and stifle our future—putting the brakes on new industries, businesses, or scientific discoveries that could accelerate economic growth. Pete will invest $500 billion to make college affordable for working and middle-class families so that 80 percent of families of public college students that earn up to $100,000 will not pay any public college tuition,” the plan summary states.

Other contenders have called for a college education to be fee-free, including Sen. Bernie Sanders (I-Vt.) and Warren, whose plan includes eliminating tuition and fees at all two-year and four-year public universities.