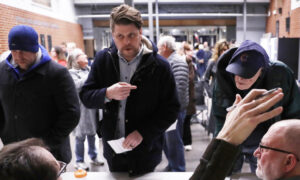 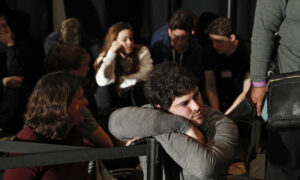 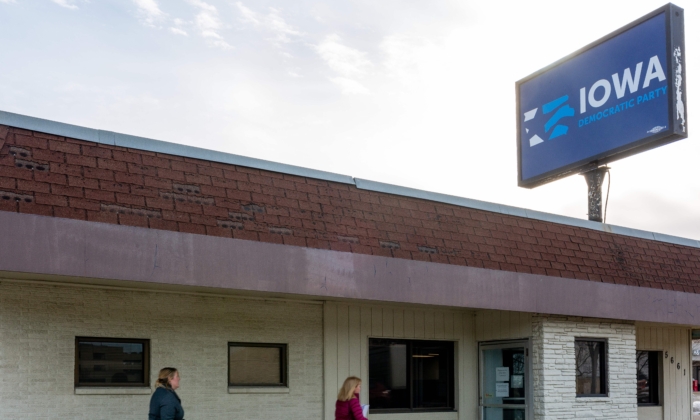 Iowa Democrats on Feb. 4 began to release some of the long-delayed results from Iowa’s chaotic Democratic Party caucuses, with former South Bend, Indiana, Mayor Pete Buttigieg leading the pack in a close race.

More than 21 hours after Iowans gathered on Feb. 3 to pick a candidate, the Democrats reported results from 62 percent of precincts, showing Buttigieg leading with 26.9 percent of the state’s delegate count. Sen. Bernie Sanders (I-Vt.) had 25.1 percent, followed by Sen. Elizabeth Warren (D-Mass.) and former Vice President Joe Biden with 18.3 percent and 15.6 percent, respectively.

Democratic officials blamed inconsistencies related to a new mobile app used for vote counting for the highly unusual delay in releasing results in the state that traditionally kicks off a presidential election year.

The delay enraged Iowa Democrats, who worried that the confusion would play into President Donald Trump’s hands and prompted some Democratic candidates’ campaigns to question whether the results would be legitimate.

It was a clumsy start to 2020 voting, after a tumultuous presidential race four years ago that produced a surprise winner in Trump.

Republicans asked how Democrats could run the country if they couldn’t conduct a caucus, while Trump mocked the Democrats on Twitter, calling the delay an “unmitigated disaster.”

“We have real concerns about the integrity of the process,” Biden spokeswoman Kate Bedingfield told CNN on Feb. 4.

“It looks like a disorganized mess,” said Jessica Leonard, 41, who runs a food truck in Winterset, Iowa.

Leonard said she normally votes Democratic but that she was so furious by the “fiasco” that she might vote for Trump in the Nov. 3 election.

“It’s like they are setting up Trump to win again. It’s just a huge embarrassment,” she said.

After more than a year of campaigning and more than $800 million in spending, Democratic candidates had expected the results in Iowa to provide some answers on how they could beat the businessman-turned-president.

Instead, they hurtled toward New Hampshire’s Feb. 11 primary with no clear answers.

“Iowa was a disaster for Iowa. It became a false start that now makes New Hampshire the key early contest and changes some of the math on who emerges as the top candidate,” said University of New Haven professor Matthew Schmidt.

The Nevada Democratic Party said that for its Feb. 22 presidential caucuses, it won’t be using the same app or vendor that led to delayed reporting of Iowa’s results.

Buttigieg expressed frustration with the delay after having told a late-night rally that there were indications he had been “victorious.”

Buttigieg and Sanders released their campaigns’ own count of the Iowa vote, which showed them having done well.

Sanders had the most support among those gathered at the University of Iowa campus. Some of the caucus-goers siding with Sanders poked fun at those standing for Joe Biden. Only a couple dozen voters out of the more than 750 who attended stood in the section for Biden, the front-runner according to national polls.

Since Iowa’s Democratic caucuses began in 1972, results have shown that candidates who don’t make it into the top three spots in Iowa are very unlikely to win the nomination. Hence, the saying that there’s only “three tickets out of Iowa.”

The Democratic candidates who have won the caucuses have gone on to win the nomination in seven out of 10 contested races.

About 171,000 people voted in the Iowa Democratic caucuses this year, according to Edison Research, on par with the turnout in 2016. The Republican caucuses had a record turnout of approximately 187,000 people.

Trump took a swipe at the Democrats, 11 of whom are contenders in the state-by-state battle to face him in November.

Troy Price, the Iowa Democratic Party chairman, said the app was recording data accurately but only showing partial data. The coding problem was fixed and state officials are verifying the data from the app with required paper documentation, he said.

Some local officials reported having trouble using the mobile app to report results from 1,600 schools, community centers, and other locations. But when they turned to the traditional method—calling results in by telephone—they were put on hold and couldn’t get through.

“We had people with their phones on speaker who were stuck on hold from 9 through at least 11,” said Bret Nilles, the Democratic Party chairman for Linn County. He said he had no problems recording results through the app.

Iowa Democrats had been keen to be more transparent in this year’s caucuses after complaints from Sanders about the 2016 caucus, when he and rival Hillary Clinton earned roughly the same number of delegates. He had asked the party for an audit and additional transparency.

This year, the state party had tried to release multiple data sets from the Feb. 3 caucuses instead of only the number of delegates each candidate earned.

Some Democrats have long complained that the largely white farming state has an outsized role in determining the party’s presidential nominee.

The Republican Party has its own history of presidential election chaos in Iowa. On the night of the party’s 2012 caucuses, Mitt Romney was declared to have won by only eight votes. But two weeks later, the party announced that Rick Santorum had actually won by 34 votes. Romney went on to be the nominee.

Iowa Democratic officials said there was no indication the mobile app was hacked.

Even without the technology problems, the distinctive Iowa caucuses can be difficult to understand.

At the caucuses in Iowa, voters gathered in groups by candidate preference in a public display of support. If a candidate did not attract 15 percent of voters, the total that’s needed to be considered viable, that candidates’ supporters were released to back another contender, leading to a further round.