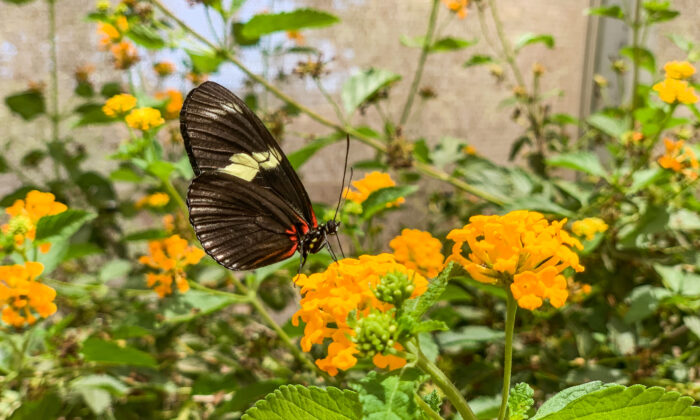 “Dad, look at this one!” a child exclaimed, pointing at a large blue butterfly, roughly the size of an adult hand, as it flew over their heads toward the wall of the enclosure.

Santa Ana Zoo’s Flight exhibit opened July 25, exposing visitors to a live butterfly experience where zoogoers have the opportunity to interact with butterflies from South, Central, and North America within a 2000-foot enclosure.

Last week, the zoo had its soft opening at the exhibit.

While a typical lifespan of a butterfly lasts 2–6 weeks, new butterflies emerge on a daily basis within the exhibit, located on the Northern end of the 20-acre zoo front property, which is home to more than 260 animals.

What was once an open picnic area, the newly launched butterfly exhibit was funded by private donations to the Santa Ana Zoo, which averages in 240,000 annual visits a year; many visits which include local students.

“The zoo offers many opportunities for fun, adventure, and learning in a unique setting with an educational focus,” Santa Ana Zoo Manager Ethan Fisher told The Epoch Times. “[It] provides a place in the community where people can gain an understanding of the complexity and interdependence of nature and the extraordinary diversity of life.”

Around the enclosure, families slowly walked together surrounded by the greenery that capture the attention of various species of butterflies.

Connected to a hanging metallic try, some of the butterfly’s gathered in groups of three or four as they indulged themselves with thinly cut pieces of fruit that included watermelon and pineapple.

The butterflies are not shy around people. As families watched them, many butterflies would softly fly by the guests within inches displaying a beautiful array of colors and patterns along their wingspans.

With over a dozen species of butterflies, zookeepers received special training before working within the exhibit, in time for the grand opening to the public.

Guests are encouraged to wear brightly-colored clothing to attract the butterflies.

The Flight exhibit of the Santa Ana Zoo will be open through the end of September and reopen for guests in Spring 2023 under the daily hours of 10 a.m. to 4 p.m.