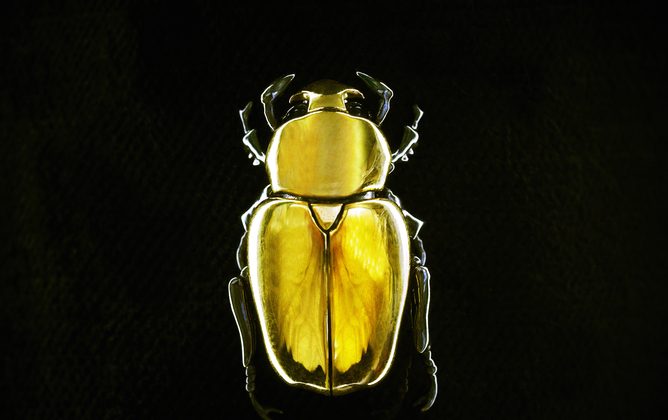 While jewellery and fashion have long been entwined, in the mid-1990s, both costume and fine jewellery lacked innovation. They were caught in a no man’s land of mass-produced chain-store brands, and failed to find a new direction during the recession. But this stagnancy has now dissipated, and a small exhibition at London’s Showstudio provides one answer as to how and why this is the case.

Rising to fame in the mid-1990s through his dramatic collaborations with Alexander McQueen, Shaun Leane has been at the forefront of shifting the status of jewellery and arguably, its role within the fashion world. His jewellery’s impact is based on a delicate balance between seeming contradictions. It’s high fashion, yet formed from heirloom materials, such as gold and gemstones. It’s contemporary, yet imbued with a multitude of historical references.

Jewellery entered the world of luxury brands in the later 1990s, primarily through connecting more firmly to high fashion – for example with Marc Jacobs’ work at Louis Vuitton and Martin Margiela’s period at Hermes. There was a shift in interest towards artisanal skill, fine materials, apparent exclusivity, and significantly, fashion credibility. Investment pieces, whether Hermes bags, Louis Vuitton luggage or fine jewellery, regained their place in the echelons of high fashion. Accessories of all kinds became fashion leaders, while simultaneously asserting their status as heirlooms to treasure and keep.

While some big name brands exploited this to the full, and tested the very notion of investment to the limit, others were more innovative and thoughtful in their approach to this new-found consumer interest in workmanship and longevity. Smaller labels emerged, including the House of Shaun Leane in 1999. These labels relied on design integrity and a sharper sense of fashion credibility.

But it was with the turn of the millennium, and the rise of internet shopping, that these small labels really got their opportunity. Sites such as Astley Clarke, which is dedicated to jewellery, and broader luxury fashion sites led by Net-a-Porter realised that there was a gap in the market – women were now buying jewellery for themselves, and were happy to purchase online.

This major shift in the way jewellery was purchased brought much greater awareness, and crucially, access to fine jewellery. It prompted an equivalent of fashion diffusion lines to develop in jewellery – less expensive ranges by jewellers including Leane.

But this “fashion jewellery” is also incredibly artistic – and hence the exhibition. It’s not only Alexander McQueen and the wedding dress that are now considered to be art.

The current retrospective of Leane’s work at Showstudio is itself a tiny, jewel-like display. It draws you in, taking you from the creamy classicism of a smart London street, to view a glass-fronted wall of fierce, yet refined designs, each in its own contained area, as though on the shelf of a 17th century cabinet of curiosity.

Leane’s work is placed next to its inspirations, from a Damien Hirst butterfly painting, to a box of glistening green beetles. The show also displays eight bespoke pieces, specially made to convey the attention to detail and fine workmanship that defines the brand.

Leane’s work draws its main influences from nature – he is perhaps most widely known for his signature “Tusk” collection, which, as the name implies, is based on curving horn-like forms that fit around the wrist in colourful, gold-tipped Art Deco style bangles, or fall from the ear in sharp metals. This collection makes clear his ability to shift easily from solid, strong shapes that speak to his love of antique jewellery, to more aggressive forms that make explicit the ways jewellery can become part of the wearer’s body, piercing through the earlobe.

This skill reflects Leane’s eclectic training. Having undergone the rigours of a Hatton Garden goldsmithing apprenticeship, he gradually segued into fashion jewellery through his work with his longtime friend, Alexander McQueen. It is this link between a patient, lengthy training in the Dickensian environment of a classical jewellery studio, and the fast-paced seasonal tread of catwalk jewellery that has given Leane his unique edge, and makes him central to jewellery’s shift into fashion’s sphere.

The exhibition draws you into his world and reminds you of jewellery’s twin impact – as something to feel on your body, and as a glimmering, visual feast for the onlooker. This combined intimacy and visual spectacle has made fine jewellery a crucial part of high fashion in recent years, and this is something that is no doubt set to continue.

Rebecca Arnold does not work for, consult to, own shares in or receive funding from any company or organisation that would benefit from this article, and has no relevant affiliations. This article was originally published on The Conversation. Read the original article.