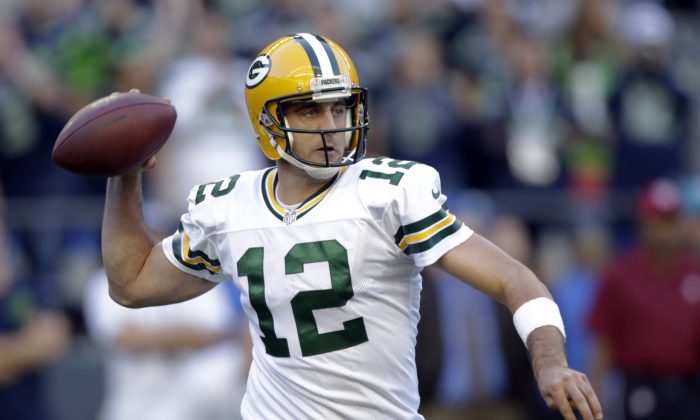 Green Bay Packers quarterback Aaron Rodgers passes against the Seattle Seahawks in the first half of an NFL football game, Thursday, Sept. 4, 2014, in Seattle. (AP Photo/Stephen Brashear)
US

NFL players typically say what college they’re from during the introductions. Rodgers went to Butte and later attended the University of California.

“Made me smirk,” said another.

OK, we got that out of the way.

Well, not really, because one of the major focal points of the 2014 season opener between the Super Bowl champion Seahawks and the Packers is what happened the last time Green Bay was in Seattle.

For those who don’t remember — and for all those Packers fans who have blocked it from their minds — the Seahawks prevailed 14-12 on Russell Wilson’s desperation pass that Golden Tate stole away from Green Bay’s secondary on the final play.

Two days later, the NFL reached a new contract with its officials, and the replacements were, uh, sent packing.

“Now, we’ll all have our own debate about that whenever the time comes when we’re retired and gone,” Seahawks coach Pete Carroll said. “That referee was standing right there, looking right there — right down at it — and he didn’t miss what he saw. He just saw it the way that Golden Tate made the catch. So I know that he wasn’t confused.”

As for this spicy matchup Thursday night to kick off the schedule, both teams are favored to win their divisions and push each other for the NFC title.

Aaron Rodgers testing Seattle’s superb secondary is intriguing. So is Marshawn Lynch running against what Green Bay sure hopes is a more stingy defense.

“I can promise you that the only time that topic will be brought up is when I’m in here,” coach Mike McCarthy told reporters. “We’re past it.”

Pro Picks came on strong like the Seahawks did in the playoffs last winter. So why not ride the champs in the opener at very loud CenturyLink Field?

The Bills take a huge step toward a 15th straight non-playoff season.

In a league pretty much all about the QBs, this one has Peyton Manning, king of Colorado, vs. his replacement in Indy, Andrew Luck. Go with the royalty in a tight one.

One of these teams that AP Pro32 has dead even gets an early foothold in the AFC North.

Not even one of sports’ greatest rivalries can overshadow the biggest NFL uncertainty: Will Johnny Football play?

Patriots haven’t lost an opener since 2003. They won’t end that success string in the Miami heat.

Early-season test in NFC South, which looks like Saints’ division to rule.

Two first-time head coaches. Game could be decided by how many times Clowney and Watt get to RG3.

Salary cap woes prevented Chiefs from improving in offseason. It will hurt them immediately …

Panthers are another team that took steps backward.

Considering their upcoming schedule, Jets already have a must-win game.

We’re already out of breath thinking about the pace Chip Kelly’s Eagles will keep. Jaguars won’t slow it much.

Rams’ defense must carry them and just might — at least this week.

Upheaval in both places. Lions seem a tad further along.