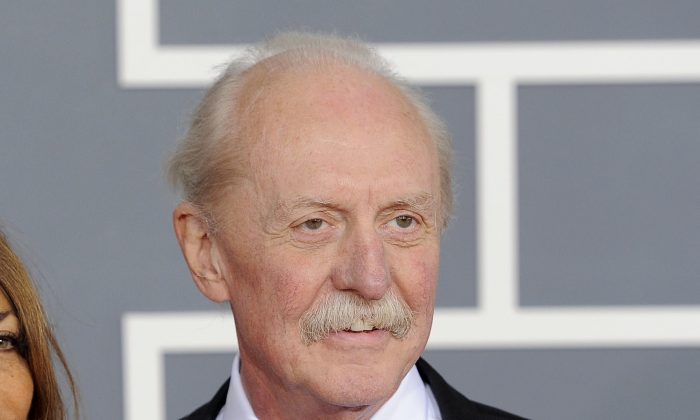 In this file photo, Butch Trucks at the 54th annual Grammy Awards in Los Angeles. (AP Photo/Chris Pizzello)
US

NASHVILLE, Tenn.—Drummer Butch Trucks, one of the founding members of the Southern rock legend The Allman Brothers Band, has died. He was 69.

Trucks was one of two original drummers, along with Jai Johanny “Jaimoe” Johanson, who helped formed the rhythms and the drive for The Allman Brothers. Formed in 1969 and led by Duane and Gregg Allman, the group helped define the Southern rock sound that incorporated blues, rock, country and jazz.

Originally from Jacksonville, Trucks joined with the Allman siblings to form the band, including guitarist Dickey Betts and bassist Berry Oakley. They moved to Macon, Georgia, to cut their first record with Capricorn Records.

In a statement released Wednesday, Gregg Allman mourned the loss of his longtime friend and partner.

“I’m heartbroken. I’ve lost another brother and it hurts beyond words. Butch and I knew each other since we were teenagers and we were bandmates for over 45 years. He was a great man and a great drummer and I’m going to miss him forever. Rest In Peace Brother Butch,” Allman said.

The two drummers melded their individual styles, with Trucks considered to be the straightforward, driving train rhythm player, while Johanson added his R&B and jazz drumming influences.

The band’s 1971 live album, “At Fillmore East,” became their seminal breakthrough album, featuring a fusion of jazz, blues and rock. It featured songs like “You Don’t Love Me” and a 22-minute-long version of “Whipping Post.”

But Duane Allman died shortly after that record in 1971 and Oakley died in 1972. The band continued to record and tour before breaking up in the late ’70s. Over the last three decades, they have reformed several times with additional band members.

In 1995, The Allman Brothers Band was inducted into the Rock and Roll Hall of Fame.

Trucks also helped encourage a family lineage of musicians. One nephew, Derek Trucks, is the frontman of the Tedeschi Trucks Band and also joined The Allman Brothers band in 1999 as a guitarist. Another nephew, Duane Trucks, is the drummer for Widespread Panic.

Trucks was most recently touring with his band, Butch Trucks and the Freight Train. He is survived by his wife and four children.