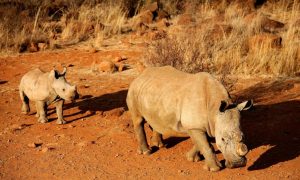 Hunting but Not Catching Corruption’s ‘Tigers’ in China
0 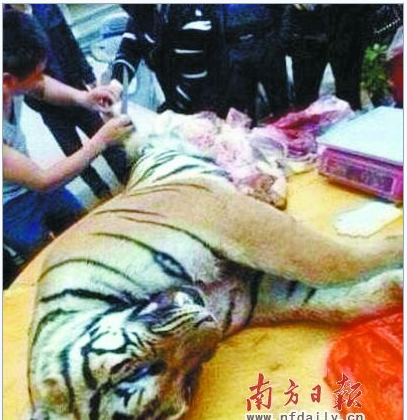 A dead tiger being butchered in China. (Screenshot/Sina News)
China

Businessmen Bribe Officials With Tiger Meat and Bones in China

Half a dozen men are crowded into a small concrete room, standing around a helpless tiger trapped in a cage. A loud electrical generator is chugging away nearby. Then, one man grabs a wooden stake with a metal spike on the end, and rams it into the tiger’s mouth. The tiger is being electrocuted. Another man pours water over the tiger’s body, so the electric current spreads. In three minutes the beast is dead, and they start cutting it up for sale.

The leaked video, shocking in its detail, spread across the Chinese Internet recently. A criminal gang that has captured and killed more than 10 tigers was also uncovered. Their key market? Businessmen who use tiger products—meat, and salves made from ground up bone—to bribe officials.

The criminal gang that was broken up in Zhanjiang City, Guangdong Province, recently, had been in the business of killing tigers for around a decade.

Along with a dead tiger, police seized a range of tiger products, stun guns, bullets, explosive-proof shields, and knives, at the group’s base in Leizhou, a part of the city of Zhanjiang.

So far 15 suspects have been arrested, and one suspect, who was later confirmed to be the butcher, died after he jumped off a building while trying to escape police.

There is a range of tiger-related products available for those with the wealth and interest to indulge. Typically, officials reserve the tiger ahead of time. Then, to make sure that they are getting fresh product, they go along to watch it being killed. Watching the show has also become a symbol of status in business and political circles in the area—something to boast about to colleagues afterward.

Once the tiger is dead, attendants can then purchase the products. These are favorites for cultivating relationships with Communist Party officials, according to Southern Daily, a newspaper in Guangzhou.

Tiger slaughters have become a “party” for political and business elites, said Mr. Chen, an official, in an interview with Southern Daily. He describes the killings as a “visual feast,” and the extension of invitations a way to accumulate social capital.

“Tiger products have a very good market. All parts are reserved by buyers even before the tigers are brought in,” the source said.

The trade and use of tiger products was banned in China in 1993, but continues illegally because it is highly profitable.

The tiger killed in the video, which was taken two years ago and only surfaced recently, was said by the authorities to be a Bengal tiger. There are no indications of where they come from, however, and how they are captured. One theory being circulated on the Internet said that they were hunted in and imported from Vietnam; another said the tigers were raised by people in the central regions of China.

“Tigers will be subject to slaughter as long as Chinese have faith in the medical value of tiger products, such as their bones or male genitalia, which are actually very controversial in terms of their efficacy,” said zoologist Xie Yan at the Chinese Academy of Sciences, in an interview with state mouthpiece Global Times.

“Tigers are first class national protected animals in our country, and it’s illegal to raise tigers without a certificate. But many will raise them for profit and do underground business.”