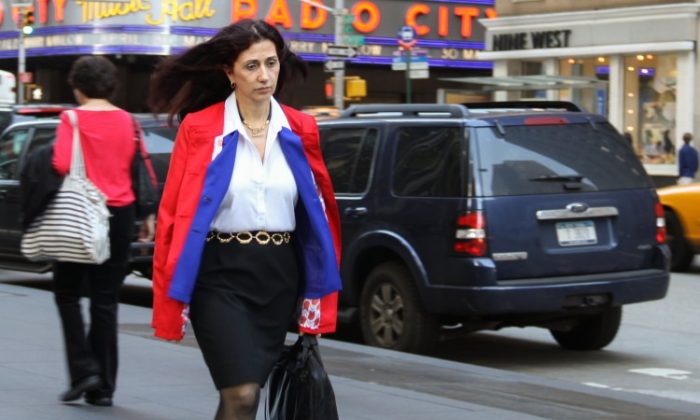 A woman walks past the Radio City Theater in Midtown Manhattan on March 20. Although women made great strides in the business world during the last century, there is still inequality in the market that stops women from achieving equal parity with men. (Benjamin Chasteen/The Epoch Times)
Business

Women have been in the workforce throughout the ages, including being servants, cooks, seamstresses, nannies, and nurses in ancient times. How else could an unmarried woman of little wealth or a woman whose husband died prematurely survive?

The New York Teacher Archive of Women’s Labor History reaches back to 1765 when “the first society of working women, the Daughters of Liberty” was formed under the auspices of the Sons of Liberty.

The 20th century was the era of women striving for recognition and acceptance as a valued resource in the business world. On June 10, 1963, the U.S. Congress passed the Equal Pay Act. In 1964, the Civil Rights Act added Title VII, forbidding employment discrimination on the basis of race and sex, and the Equal Employment Opportunity Commission was established the same year.

“Women have the rights that they deserve, and have won the battle against society. The labor market today has a new face. … Women of the past have paved the way for the rights of women in the present day,” according to an article on the HubPages website.

“Women comprise 46 percent of the total U.S. labor force. With almost half of the workforce being women, female employees aren’t exactly a rarity. For most women today, getting a job is an expected part of life. This is a big change from past decades. In 1900, fewer than 20 percent of women participated in the labor market while today the number is around 75 percent and growing,” according to an article on the College Times blog.

Although women made great strides in the business world during the last century, there is still inequality in the market that stops women from achieving equal parity with men.

Although women are almost one-half of the labor force, close to 60 percent of working women earn less than $8 an hour, and almost all women in the workforce make less than a male with the same experience, education level, and knowledge. Women are paid three quarters for every dollar a male earns, and the higher the woman’s educational level, the greater the difference in salary between men and women.

“The sad reality is that when you look at the hard facts, there is still a fair amount of inequality when it comes to women’s role in the working world,” according to the College Times article.

“The past 12 months have seen women take the lead in some of the toughest economic and political environments,” according to a recently released Grant Thornton International Business Report, detailing statistics on women moving into higher-level management positions.

On Feb. 9, Petrobras, one of the world’s five major oil companies, selected 58-year-old Maria das Gracas Silva Foster as its first woman CEO. She succeeded José Sergio Gabrielli de Azevedo, advancing from her position as director of gas and energy, which she held since 2007.

There are 17 female CEOs on the Fortune 1–500 list (3.4 percent of those named on the list), among them Meg Whitman of Hewlett-Packard Co., Virginia Rometty of International Business Machines Corp., Indra K. Nooyi of PepsiCo Inc., Irene B. Rosenfeld of Kraft Foods Inc., Ursula M. Burns of Xerox Corp., and Denise M. Morrison of Campbell Soup Co.

There are 18 female CEOs on the Fortune 501–1000 list (3.5 percent of those named on the list), among them Sara Mathew of Dun & Bradstreet Inc., Laura J. Alber of Williams-Sonoma Inc., and Karen W. Katz, of the Neiman Marcus Group Inc.

In 2004, 19 percent of all senior managers worldwide were women. By 2007, the number of females in executive positions increased to 24 percent, moving down to 20 percent by 2011. During the first few months of 2012, women managers globally increased by 1 percent to 21 percent, according to Grant Thornton.

“Whilst male and female graduates are recruited in almost equal numbers by businesses, the proportion of women in the top jobs around the world is very low. Just 3% of Fortune 500 CEOs are women,” said Grant Thornton in its report.