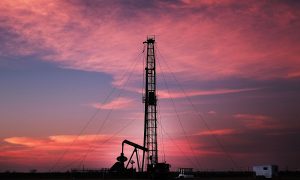 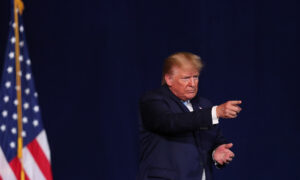 Trump Unveils Plan to Speed Up Permits for Big Projects
0 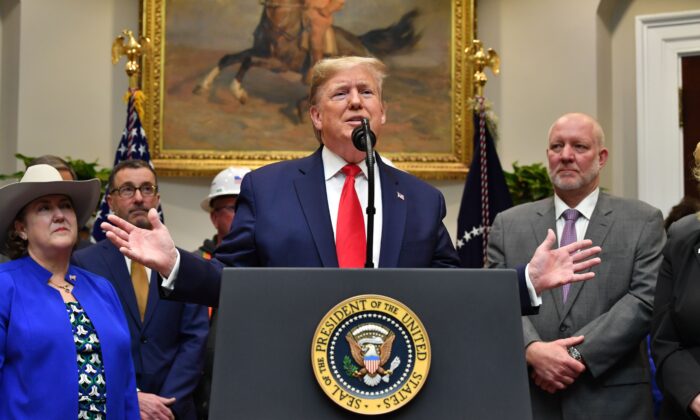 President Donald Trump speaks about the proposed changes to the National Environmental Policy Act at the White House in Washington, DC on January 9, 2020. (NICHOLAS KAMM/AFP via Getty Images)
Politics

WASHINGTON—Business and labor groups have banded together to support President Donald Trump’s recent proposal to streamline the permitting process for major infrastructure projects, which is already facing legal challenges.

Led by the U.S. Chamber of Commerce, 45 organizations representing broad interests throughout the country have formed a coalition to back the proposed reforms to the National Environmental Policy Act (NEPA). The Southern Environmental Law Center has sought an injunction in federal court blocking the Trump administration’s planned changes.

The Trump administration on Jan. 9 revealed a plan to streamline NEPA as part of its broader effort to cut regulatory red tape.

“We need to modernize NEPA and we need to do it now,” Thomas Donohue, CEO of the U.S. Chamber of Commerce, said at a press conference hosted by the Chamber on Feb. 24.

While NEPA was created to protect the environment, it’s currently misused to “block infrastructure developments that could have yielded significant environmental benefits,” he added.

For example, the Purple Line public transit projects in suburban Maryland, which became mired in legal reviews and litigation was delayed for 14 years, he noted. The project is part of the proposal to expand the D.C. Metro system to reduce traffic congestion and carbon emissions.

Enacted in 1970, NEPA is a core regulation that requires the federal government to assess the environmental effects of major infrastructure projects, including the construction of roads, bridges, highways, transmission lines, conventional and renewable energy projects, and broadband deployment.

The proposed changes by the administration will be the first comprehensive update to the NEPA regulations since 1978.

Taos Regional Airport in New Mexico, for example, has been delayed for 20 years, he said. And a two-lane roadway and bridge project in Grand Haven, Michigan, to improve traffic congestion has managed to clear its final hurdle after 16 years.

The White House Council on Environmental Quality is accepting public comments on the proposed regulations until March 10. It also hosted two public hearings on the initiative.

Critics argue that the proposal is an attempt to shield environmental violations from judicial oversight. Hence, the new rules could face legal challenges by environmental groups, according to legal experts. And some Democrats who opposed the administration’s move could call for a legislative response.

Construction companies in the United States are stuck in never-ending federal reviews, said Stephen Sandherr, CEO of Associated General Contractors of America, an organization with more than 26,000 member firms.

“The problem is the current environmental review process long ago stopped being about evaluating the environmental impacts of proposed projects and has become a way for special interest groups to further their agenda by holding needed infrastructure and development projects hostage to countless lawsuits,” he said.

Speaking at the press conference, Erik Milito, president of the National Ocean Industries Association, said that the United States has tremendous wind capacity off the Atlantic coast and a pipeline of projects worth $70 billion is waiting for approval.

“We’re on a cusp of becoming the global leader in offshore wind,” he said. “NEPA has stood in the way of allowing these projects to actually move forward.”

NEPA has also been a “costly and time-consuming burden” for farmers and ranchers, said Colin Woodall, CEO of National Cattlemen’s Beef Association.

The proposal to update NEPA has been welcome news for thousands of farmers and ranchers who suffer from the bureaucratic red tape, he said.

“Some ranch families have faced grazing permit delays as long as 30 years,” he said.

Speaking at the event, Zippy Duvall, president of the American Farm Bureau Federation, said that the streamlining of permits would also help narrow the gap between rural and urban areas in infrastructure and broadband access.

“It’s ridiculous that a farmer’s child has to go to McDonald’s to be able to get online and keep up with his education,” he said. “The modernization of the NEPA is long overdue and it’s going to benefit America’s farmers and consumers.”

Business groups believe that NEPA reform will help reduce emissions, as it will expedite the approval of investments in renewable energy sources and transmission infrastructure.

“If we have any hope of achieving a net-neutral climate economy in 30 years, you’re going to have to invest literally trillions of dollars in brand new energy systems.”