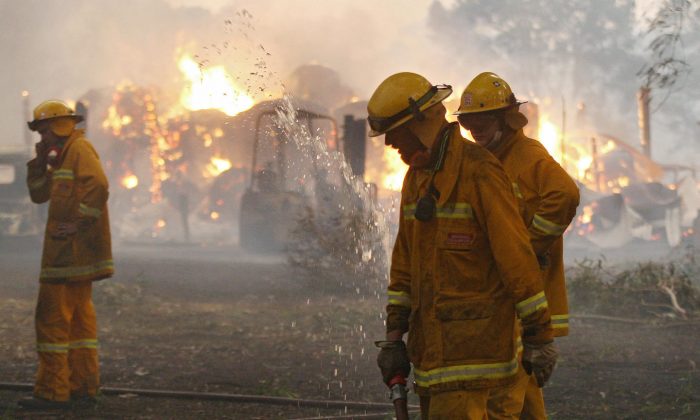 Country Fire Authority (CFA) volunteers prepare to move to save another house during the 2009 Black Saturday bushfires in Victoria. The fires destroyed over 2000 houses and came perilously close to outer Melbourne suburbs. (William West/AFP/Getty Images)
Australia

Despite present cooler weather conditions, there are presently 100 fires burning across New South Wales. Communities in South Australia, Western Australia and Victoria remain on alert as fires are contained but not controlled.

“As the cities expand you are getting more people living up against bushland,” he told The Epoch Times. “The suburbs are not safe necessarily.”

He says that many residents were adopting bushfire resilience strategies: removing flammable trees, planting fire resistance foliage, making paths and clearing growth from around the house.

“They are really trying to create gardens that are going to give them what they want – a place to enjoy but also a defendable space,” he said.

Dr Gill believes awareness of the 2003 bushfires in Canberra and the 2009 Black Saturday bushfires in Victoria have contributed to a positive change in behaviour in rural residential areas but not in outer suburbs, despite the threat posed to those areas during the fires.

In 2003, around 70 per cent of pasture, forests and parkland surrounding the capital was burned before the fires entered the suburbs of Canberra, killing four people and destroying 419 homes.

During the Black Saturday bushfires in Victoria, 400 fires burning around the state, burning around one million acres of land and killing 173 people – Australia’s highest loss of life from a bushfire event. The fires coming perilously close to the outer suburbs in Melbourne’s north.

Bushfires are understood to be a part of life in Australia, with major destructive fires recorded since the mid 1800s at decade intervals and in indigenous culture.

However, the independent Climate Council – formerly the government-funded Climate Commission – says that with a climate that is hotter and moister than half a century ago, fire seasons have become longer. The Australian Bureau of Meteorology says 2013 was Australia’s hottest year on record, with the hottest summer, hottest January and hottest September ever recorded.

More extreme events are predicted and areas previously considered immune to the threat of bushfires are now on alert.

“Fire frequency and intensity is expected to increase substantially in coming decades in many regions, especially in those regions…where a substantial proportion of the Australian population lives,” the report warns.

Dr Gill says he lives in an outer suburb of Wollongong which is also categorised as a bushfire zone, but doubts many of his neighbours have taken precautions or are even aware of the dangers.

“Suburbs everywhere are pushing right out into the bush,” he said.

It is well documented that indigenous Australians burned bush areas to reduce fuel and prevent uncontrollable fires. Prescribed burning is a favoured strategy among risk prevention professionals, but Ross Bradstock, director of the centre for the management of environmental risk from bushfires at the University of Wollongong, is not convinced.

Mr Bradstock says the hotter and wetter conditions predicted for Australia in the future will rule out controlled burning as a means of solving the problem.

He says the scale and cost of the problem would be prohibitive; even if prescribed burning was increased fivefold, it would still not secure urban and rural developments from bushfires, he said.

Dr Bradstock believes Australia needs a multi-strategy approach with a strong focus on property and infrastructure.

“A range of research shows that it is the fuel conditions in forests close to property, the distance of property from forest edges, and the nature of gardens that have a very strong influence on risk or loss during fires,” he wrote in an opinion piece for academic website The Conversation.

Dr Gill is still processing the data from his survey, but says he believes it is the work at community level, particularly the volunteer rural fire brigades, that has been most influential in changing behaviour in rural residential areas.

“Volunteer brigades in some places are really highly organised and they really know who is there and who is prepared,” he said. “They try and keep tabs on and make a point of meeting new residents.”

Dr Gill says much more work is needed to increase bushfire awareness and hazard reduction strategies at the suburban level.

“Certainly at the edge, when you have bushland coming up to houses, I think that kind of engagement is going to be critical,” he said.