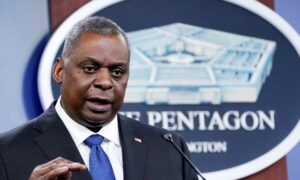 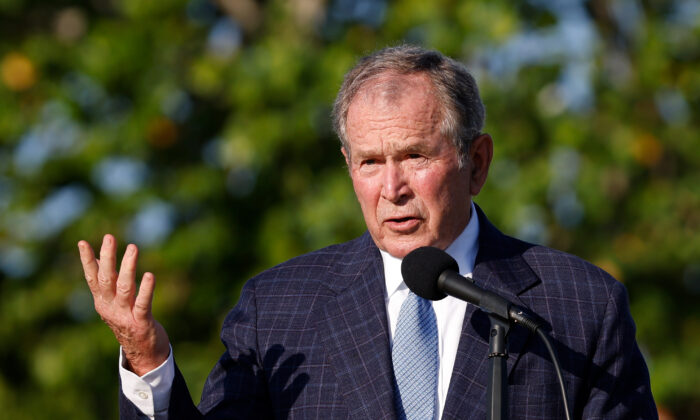 Former U.S. President George W. Bush speaks during the flag raising ceremony prior to The Walker Cup at Seminole Golf Club in Juno Beach, Fla., on May 7, 2021. (Cliff Hawkins/Getty Images)
US News

Bush, a Republican who made the decision for the 2001 invasion of the Middle Eastern country, issued the statement after saying last month that believes there will be “unbelievably bad and sad” consequences for the United States pulling troops out of Afghanistan.

“Laura and I have been watching the tragic events unfolding in Afghanistan with deep sadness. Our hearts are heavy for both the Afghan people who have suffered so much, and for the Americans and NATO allies who have sacrificed so much,” the former president said.

He added that the U.S. government has “the legal authority to cut the red tape for refugees during urgent humanitarian crises.”

“And we have the responsibility and the resources to secure safe passage for them now, without bureaucratic delay,” he said, without mentioning potential safeguards against the risk that terrorists could pose as refugees.

The Pentagon has said it will provide temporary housing in the United States for up to 22,000 Afghans applying for Special Immigrant Visas (SIVs), available to interpreters and others who assisted the U.S. troops in Afghanistan. Those to be provided housing will include family members of the applicants and other vulnerable Afghans, a spokesperson said on Monday.

The U.S. military will also fly up to 30,000 people out of Kabul, including embassy personnel, U.S. citizens, Afghan SIV applicants, and other at-risk individuals.

Of that total, 8,000 will be transported to a third country for visa processing, with the other 22,000 heading to the United States.

Advocates estimate 50,000 to 80,000 SIV applicants and family members require evacuation, but the Biden administration thus far has only evacuated a fraction of that total.

More than 60 countries issued a joint statement late on Sunday calling on the Taliban terrorist group to allow safe passage for foreign nationals and Afghans out of Kabul.

Bush authorized the invasion of Afghanistan while in office shortly after terrorists attacked America on Sept. 11, 2001, ramming planes into the Twin Towers in New York City and the Pentagon in Washington.

Former President Donald Trump, a Republican, initiated the U.S. withdrawal, which has continued, although delayed, under President Joe Biden.

Bush warned last month that the withdrawal would enable the Taliban to gain more power, putting women and children in danger.

“I’m afraid Afghan women and girls are going to suffer unspeakable harm,” he said. “They’re just going to be left behind to be slaughtered by these very brutal people, and it breaks my heart.”

Secretary of State Anthony Blinken told NBC’s “Meet the Press” on Sunday that, given America’s fundamental objectives to defeat Al-Qaida and eliminate that terrorist threat was fulfilled, the Biden administration had decided that “remaining there in the midst of a civil war for another five, ten, or twenty years was simply not in the national interest.”

“That is the hard decision the President made,” he said.

Biden in a speech on Monday defended his administration’s move to withdraw all American forces, but admitted that the Afghan government fell more quickly than expected, suggesting that its defence forces lacked a fighting spirit.