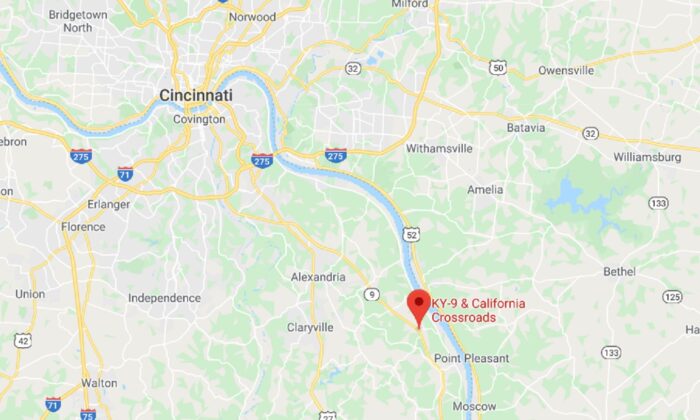 The approximate location of a crash involving a bus carrying Covington Catholic High School students on AA Highway in Kentucky on Jan. 25. (Screenshot via Google Maps)
Crime and Incidents

A charter bus carrying students of Covington Catholic High School who were returning from the March for Life rally in Washington was involved in a fatal crash in Kentucky on the morning of Jan. 25, local media reported.

The crash occurred at the intersection of AA Highway and California Crossroads (about 20 miles southeast of Cincinnati) around 7 a.m. local time, according to police. Witnesses said the car was traveling in the wrong lane and hit the bus head-on.

The driver of the car was killed, while several people on the bus suffered minor injuries, according to Campbell County police.

“One student had a bloody nose and a couple of chaperones had bumps and bruises,” FOX19 reported, citing an unnamed source. The driver of the bus suffered a minor knee injury, the bus company, Gold Shield Transportation, said.

The bus was among a caravan of four buses carrying some 200 passengers.

The front passenger side of the bus was severely damaged in the crash. Occupants were able to exit the bus through emergency exit windows.

A witness, Ricky Lynn, said he was driving north on the highway that morning and saw a car coming at him in the wrong lane.

“I glanced over and looked and all I’d seen was headlights. I was able to get out of the way and I looked back to make sure everything was okay. I didn’t see anything happen, so I kept going,” Lynn said.

He saw the crash on his way back.

Parents told WLWT5 that a priest with the Diocese of Covington traveling in the caravan performed a final blessing over the car driver killed in the crash.

“This morning, a bus carrying students and chaperones home from the March for Life in Washington, DC was involved in an accident,” the diocese said in a statement. “EMT personnel and the Campbell County police have been at the scene and are handling the matter. Please join us in praying for everyone involved in this accident.”

Senate Majority Leader Mitch McConnell (R-Ky.) responded to the incident in a Jan. 25 statement published on Twitter by his press office:

“Tragic news this morning as #Kentucky students return home from the March for Life. Elaine and I will keep all involved in our prayers, and we’re thankful to the first responders on the scene. I’ll continue closely monitoring the situation.”

Covington Catholic High School has been in the news due to an encounter between its students and a Native American activist following the 2019 March for Life.

The encounter was extensively covered by media, initially using short video clips that made it appear as though the students were mocking the activist, 64-year-old Nathan Phillips.

Longer video footage of the incident showed that the students began to cheer and shout their school chant in response to offensive remarks being made to and about them by a small group nearby of Black Hebrew Israelites, a group known to have members expressing anti-white and anti-Semitic views.

The footage showed it was Phillips who approached the students and, for several minutes, banged his drum within inches of the face of Nick Sandmann, one of the students, who responded by standing silently with a smile.

Sandmann responded to the media coverage by suing several large media companies. CNN settled with him on Jan. 7 for an undisclosed amount; his suits against The Washington Post and NBC Universal continue.

Sandmann attended the March for Life this year. But he wasn’t on the bus involved in the crash, according to Todd McMurtry, one of his lawyers.

“He traveled separately with his parents,” McMurtry told The Epoch Times via email.

Update: The article has been updated with a statement by Sen. Mitch McConnell (R-Ky.).