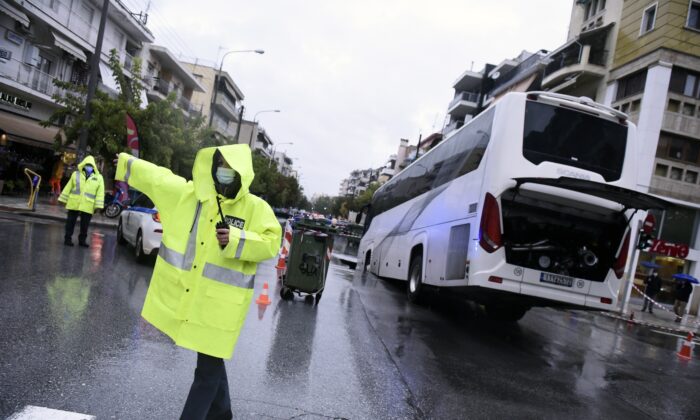 Police cordon off a road after a bus transporting oil refinery workers fell into a sink hole in the northern city of Thessaloniki, Greece, on Oct. 15, 2021. (Giannis Papanikos/AP Photo)
Europe

THESSALONIKI, Greece—A bus transporting oil refinery workers fell into a sinkhole in the center of Greece’s second-largest city Friday as storms continued to batter the country, damaging roads, closing schools, and causing the deaths of at least two people.

Authorities said all 15 people on the bus in Thessaloniki were unharmed. The incident occurred early Friday as the refinery employees were heading to work. The front of the bus initially partially tipped into the hole, allowing people on board to escape through the rear door. The empty vehicle later fell deeper into the hole before a crane removed it.

Hundreds of homes in Athens, Greece’s capital, were flooded, and major roads remained closed as the storm crossed the country, heading east.

Flooding killed one person on the Greek island of Evia, where the severe weather compounded the damage from a massive August wildfire. Torrential rain was also blamed for a traffic accident in Greece’s southern Peloponnese region which left one woman dead and several people injured.

Schools were closed in Athens and many flood-hit parts of the country including on Corfu and other islands along Greece’s western coast. Rescue helicopters on Corfu were used to lift stranded residents off the rooftops of flooded buildings.