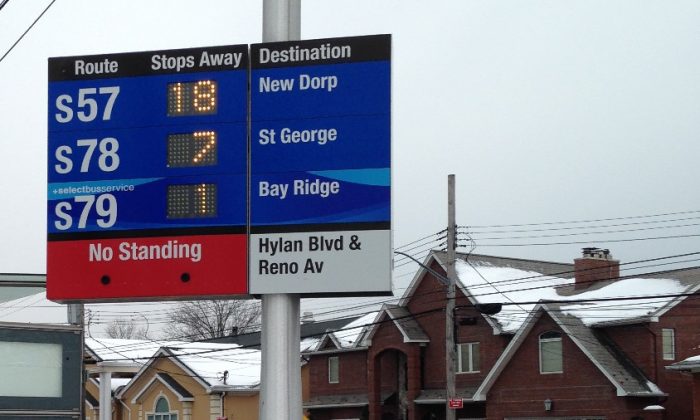 A solar-powered countdown clock in Staten Island, New York, that was installed as part of a pilot project last year. The clock uses GPS data from the buses to tell riders how many stops away their bus is. (Riders Alliance)
New York

NEW YORK—About 20 bus riders joined a rally Sunday across from City Hall asking for countdown clocks at bus stops. Organized by Riders Alliance, the rally called on the city to expand a “bus countdown clock” program. Countdown clocks were installed in two bus shelters in Staten Island as a pilot project last year.

John Raskin, Executive Director of Riders Alliance, organized the rally and is pushing to expand the pilot project city-wide.

Regular bus rider Bob Nelson, 63, from Cobble Hill, Brooklyn often rides into Manhattan. “I can’t tell you the number of times I stand at the bus stop, not seeing a bus,” he said.

Raskin said the MTA estimated one free-standing solar powered sign would cost around $20,000, while other cities like Washington DC have installed electronic signs for $4,000.

On the subway MTA currently has 177 countdown clocks. “Countdown clocks have been a huge hit on subway platforms,” said Raskin. “Now it’s time to bring them to bus stops.”

Next month all MTA buses in the city will have GPS tracking, known as MTA Bus Time, to allow bus riders to estimate when a bus will arrive at their stop. MTA’s “Bus Time” lets riders use electronic devices to find how many stops away their bus is.

The MTA has invested in technology that provides real-time bus information via smartphones apps or texting otherwise known as the “Bus Time” program. But this rules out those who don’t use a smartphone.

Carmen Bianco, the head of New York City Transit, said, “As we have seen with train arrival information in the subway, customers appreciate when they know when that train or bus will show up at the station or stop.”

Bus riders at the rally would certainly agree.

According to Riders Alliance, for the first time ever, technology now exists to allow bus countdown clocks to be posted anywhere in the city.