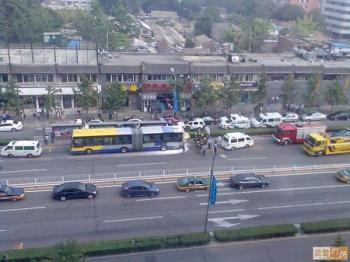 Route 10 bus after the explosion. (Photo taken from Interet.)
China

The explosions happened near Beijing’s Chang’an Street at 11:00 a.m. and 4:30 p.m. on August 6, reportedly injuring at least four passengers. No one was killed in these explosions.

The first explosion occurred around 11 a.m. When Route 205 bus was approaching the west gate of Qinghua University. The air conditioner on the bus suddenly exploded and injured three passengers on the bus. The victims sustained different degrees of injury.

Ms. Huo, a passenger, told Beijing Times (Jing Hua Shi Bao) during an interview that she was riding on the bus with two friends to Xizhimen when the explosion happened. They were standing near the back door in the crowded bus. When the bus approached the west gate of Qinghua University she “suddenly heard a loud explosion in the bus and felt something flying [towards her.]” She turned around to find the two air conditioning units near the back door had exploded and thick smoke kept coming out. But she didn’t see any fire. Her friend Ms. Shan was injured on her left leg with metal debris shot inside. The legs of the two passengers sitting next to her were also injured. Ms. Huo recalled, “Everyone on the bus was panicking. Some burst into tears.”

A mechanic named Wang working in a car repair shop on the west side of the street witnessed the explosion. “I was standing on the wayside,” Wang recalled. “I suddenly heard a muffled explosion that sounded as though a bottle of liquid gas had exploded.” He looked toward the direction of the explosion to find dark smoke coming from a bus. “It came from underneath the bus door.”

After the explosion, the bus driver parked the bus on the roadside, had all the passengers exit the bus and reported to the police. The ticket inspector accompanied three injured passengers to Haiding Hospital by taxi.

Ms. Shan was reportedly injured in five places on her legs. She was admitted to the hospital as an inpatient because the cuts were deep. The other two victims were a boy and his older sister. The girl was bruised on both legs and suffered minor injuries. Her brother's right ankle was fractured and needed surgery.

According to the police arriving at the scene, it might have been the air conditioning pump that caused the explosion.

The second bus explosion was published on the Internet yesterday by a local resident before the Chinese media reported it. The explosion took place at a bus stop on Naoshikou Boulevard right next to Chang’an Street.

According to the Beijing resident, he was in an office building with his colleagues located on the street where the explosion happened. After hearing two loud bangs, a colleague sitting next to the window told them of the explosion on the bus. Within minutes, fire fighters rushed to the scene.

According to an identified witness, the female bus driver was very calm. She tore the smoking engine away from the back of the bus with gloves.

A dispatch manager of Bejing bus route 10 secretly revealed that the two bus explosions yesterday both happened near Chang’an Street. The explosion on the route 10 bus was more severe. It took place on Naoshikou Blvd at 4:30 p.m., August 6 where a middle-aged woman’s right leg was broken.