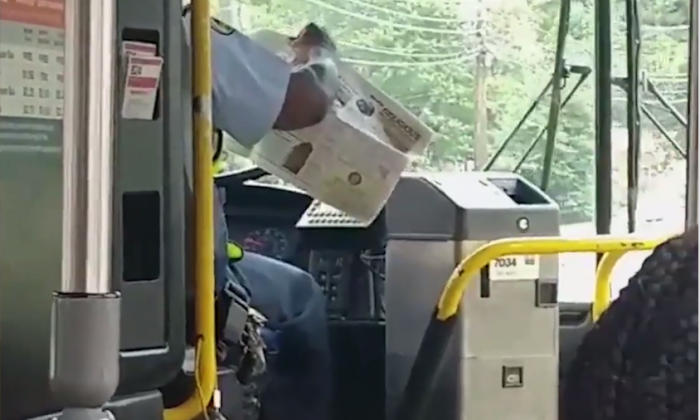 A bus driver in Maryland has been suspended after a video of him flipping through the pages of a newspaper while driving emerged on social media.

Passenger Myles Hill noticed the driver of his bus leisurely flipping through a newspaper as the bus was moving. He captured the moment on his phone and posted it on Twitter asking, “Should my bus driver be reading and flipping pages in the newspaper while driving?”

His video footage is below.

Hill noticed the driver, who was turning the pages of a newspaper, and asked a friend, “Is that bus driver reading the paper?” She then said, “Oh my gosh, yeah!'” the Washington Post reports.

Hill is a student at the University of Maryland, and was taking the F6 bus home on Friday at around 2 p.m.

“We appreciate the rider who brought this safety concern to our attention. What is shown in the video is obviously disturbing and completely unacceptable,” the WMATA said in a statement. “The bus operator has been identified and immediately removed from service pending an investigation.”

Ron Holzer, a spokesman for the WMATA, said that the driver is not being named and is on paid leave pending an investigation.

Shortly after tweeting the video, Metrobus Info replied on Twitter apologizing and said that they will pass on the information to the division for investigation. Hill responded saying the driver slowed down while reading but wasn’t speeding.

No problem. He wasn't speeding or anything. He just slowed down dramatically and I almost missed my transfer because of it.

Holzer said the WMATA has a “zero-tolerance” policy for texting while driving, but does not have immediate information on whether a metro bus driver had previously been caught reading a newspaper while driving.