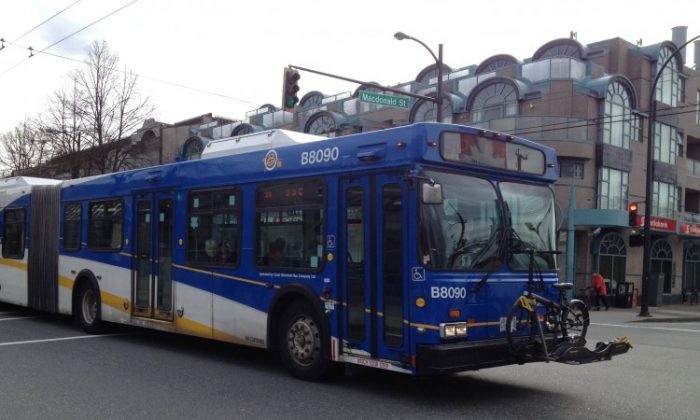 A TransLink bus travels along Broadway at MacDonald in Vancouver. Assaults on bus drivers in Metro Vancouver increased 21 percent in 2011. (Helena Zhu/The Epoch Times)
US

Bus Driver Attacks on the Rise in Metro Vancouver

Bus drivers in Metro Vancouver can breathe a sigh of relief after the arrest last week of 19-year-old a man who allegedly choked a driver and stabbed a passenger in two separate incidents.

The first attack occurred on Feb. 18 when the man choked a Coast Mountain bus driver after the driver had asked him not to stand so close to the front of the bus, blocking the door.

In the second attack, a 41-year-old male passenger was stabbed without warning when exiting a bus. After being hospitalized, both the driver and passenger are expected to recover.

Concerned that a serial attacker was on the loose, the union representing Metro Vancouver bus drivers had issued a public warning while offering a reward for information leading to the attacker’s arrest.

Canadian Auto Workers Local 111 president Don MacLeod says bus operators were already anxious because of the 21 percent increase in assaults in 2011—145 in 2011 compared to 119 in 2010.

This year, a total of eight driver assaults have occurred in the area so far.

Another reward remains posted for information leading to the arrest and conviction of a man who sexually assaulted a female bus driver while she was on duty in East Vancouver on Jan. 1.

“They’re just unprovoked attacks, that’s what they are,” says MacLoed, adding that while bus drivers in all jurisdictions have faced violence, Metro Vancouver appears to be “on the higher end of assaults” per capita.

Metro Vancouver bus Driver Charles Dixon is still off work after being sucker-punched a year ago when he asked a passenger who had entered through the back door of the bus to re-enter through the front door.

His attacker, 19-year-old Del Louie, will be sentenced on April 3. The Crown is asking for a 9 – 12-month jail term and probation, while Louie’s lawyer wants a conditional sentence that would keep his client out of jail.

Louie was previously convicted of assaulting a female bus driver and has twice breached his bail conditions.

MacLoed says a tough sentence would act as a deterrent to would-be attackers. “The message needs to be sent here that this is not acceptable.”

A tough sentence is precisely what a judge in Alberta meted out to Gary Mattson who viciously attacked an Edmonton bus driver in 2009.

Tom Bregg tried to remove a heavily intoxicated Mattson, who had refused to pay the $2.50 fare, from his bus. After punching Bregg three times in the face and knocking him unconscious, Mattson pulled him off the bus and stomped on his face repeatedly.

The attack left Bregg with brain injuries and blind in one eye.

Last July, Judge Harry Bridges declared Mattson a dangerous offender, which means he will remain in prison until it’s determined that he no longer poses a risk to the public.

Some attacks in Metro Vancouver have occurred while the bus was in motion, making it a public safety issue, says MacLoed. In light of that, the union has been working at the federal level to have the criminal code amended so that anyone who assaults a bus driver receives a stiffer penalty from the courts.

“We have had four drivers over the last year or so that have been assaulted while the coach was in motion,” he says.

“We need to be concerned about trying to cut this off at the pass before we end up with a very serious situation on our hands one day where the coach goes out of control because the driver’s been assaulted. You can just imagine the potential there, and none of it’s good.”

“The combination of changing the legislation and having a commitment that police and security will be on these buses will be much more proactive than they way things are today,” says MacLoed.

“We believe that these are steps in the right direction and could certainly get us down to eliminating many of these assaults.”

Trump: Leaders Called on Election Night to Congratulate Him, Then Votes Came in ‘Dumps’
0