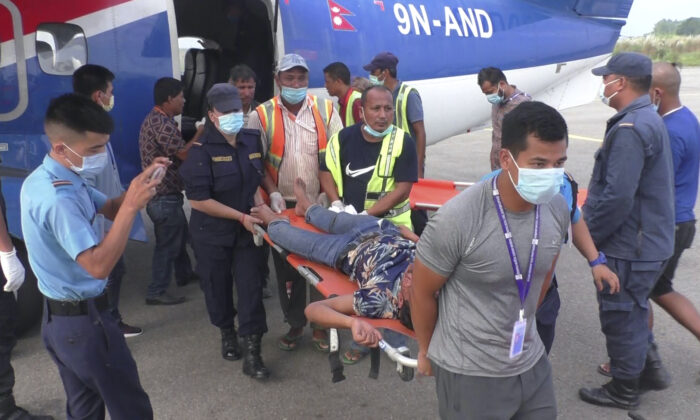 One among many passengers injured in a bus accident in western Nepal's Mugu district is rushed for treatment after being airlifted to Nepalgunj, Nepal, on Oct.12, 2021. (Krishna Adhikari/AP Photo)
Asia & Pacific

KATHMANDU, Nepal—At least 28 people died on Tuesday in western Nepal after the bus they were on skidded off a mountain road and fell hundreds of meters into a gorge, authorities said.

“We are still busy searching for bodies around the area where the bus fell,” he said. The injured were rushed to a hospital.

The bus, which started from the city of Nepalgunj was just a few miles short of its destination, Gamgadhi town in Mugu district, when it veered off the road.

It is not clear what caused the crash or how many passengers were on board. Officials feared that the death toll could rise as rescue operations were still underway.

Road accidents are common in mountainous Nepal and are often blamed on poorly maintained vehicles and highways, and narrow roads with sharp bends.