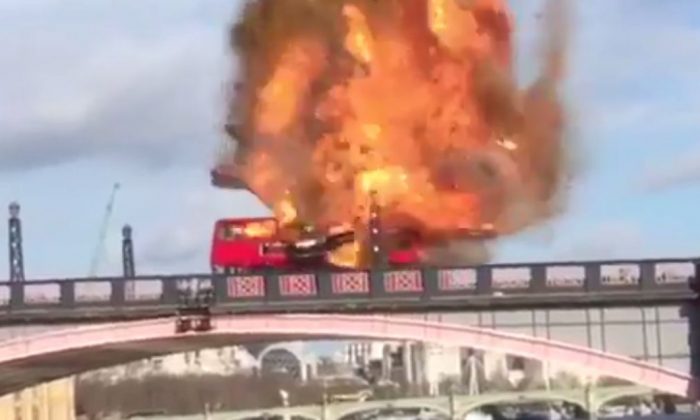 Bus Blows Up On A London Bridge For Movie Stunt

Onlookers in London were terrified on Sunday after a bus exploded on Lambeth Bridge, which was actually part of a movie that is being filmed in the area.

Shooting for “The Foreigner,” starring Jackie Chan, has been under production in the city.

Just another day on the River… pic.twitter.com/Ts3bojblmk

The filmmakers were subsequently slammed on social media for blowing up a double decker bus with little warning, the BBC reported.

The Port of London Authority confirmed it was a stunt for the movie.

The London Fire Brigade captured the footage. They were on standby in case anything went wrong.

The producers of the film said they posted a warning on Twitter. It read, “The explosion is controlled and operated by our special effects team,” according to Sky News. It added: “Every precaution will be taken to ensure the safety of the people in the area.”

Conservative MP for Mid Worcestershire Nigel Huddleston posted a video of the explosion on Twitter. He said, “Anyone worried about the exploding bus on Lambeth Bridge just now? It was just for a movie.”

He told Sky: “Some may fear it was for real if far enough away not to see the cameras and crew.

“They did notify locals by putting notices in flats and offices etc. But given the size of the explosion I’m sure many tourists and some locals must have been worried.

A number of people lashed out at the film’s producers over the stunt.

Londoners would have liked more warning that Jackie Chan was going to blow up a bus on Lambeth Bridge: https://t.co/wt2dd80eHO

Why did London authorities not warn us that the #lambethbridge bus explosion was going to happen? Surely it’s best to avoid scaring people?

Who on earth allowed a film company to blow up a bus on a bridge in central London? https://t.co/1dJM3Wy0af